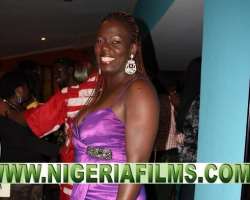 Four years after she made headlines with her nude pictures which were splashed on the pages of an evening publication, Anita Hogan is back.
The former 2005 GUS contestant who went underground after the storm that followed the publication can beat her chest and tell anyone that cares to know that greater things have happened to her since the deadly scandal broke.

A proud mother of a baby boy, Munachi, Hogan, who remained undaunted while the scandal lasted, took a break from acting to nurse her wounds, and re-organize herself. She's bracing up to adorn the screen again.
In spite of the scadal her Dutch husband, never let up intead, stood by her throughout the ugly incident.

She was one of the celebrities that graced the red- carpet at last Sunday premiere of two movies, Bursting Out and Holding Hope by the trio of Emem Isong, Desmond Elliot and Uche Jombo. In this chat, Anita said she has overcome the incidence .

Anita, it's nice seeing you again. How's life treating you?

Life has been good to me and it's has been absolutely wonderful and fantastic. I took a break from acting to have my baby. But right now, I'm back. Since I returned, I have been busy attending celebrity functions to reintegrate myself into the fold.

How long have you been in the country?

Just about four months now. I'm based here in Lagos but my husband is engaged in this kind of job that takes him from one country to another. Sometimes I'm obliged to travel with him.

Could that be the reason you stayed off the screen?

Like I said earlier, I took a break to attend to my family. I have been off the screen for one year now. It does not mean I have abandoned the screen. Right now, I'm ready to hit the screen again. But the scripts are not flowing yet. A lot of producers are not aware that I'm back. They think I'm still nursing my baby, but my baby is eight months old and that means I can return to work.

Looking back, would you say life has been fair to you?

It's a mixture of sadness and joy. I came from a military background, my father was a colonel in the Nigerian Army. Discipline was the order of the day in my family, but when I completed my education, I tasted a little bit of freedom with its attendant good and rough times. It's just the normal thing that the average human being experiences in life.

And your nude pictures scandal?

The scandal never broke me down. It only strengthened me as a human being. The scandal just came and gave me what I could call “stronger shock absorbers” Now if anything hit me from any angle, my shock absorber is stronger and ready to absorb such earthquake.

How do you feel, each time you remember the scadal?

Nothing out of the ordinary. One thing I know about life is that it celebrates positivity and not dwelling on negativity which draws one backward. And my fans will be surprised that I have not moved on after that scandal.

There are more things to celebrate in my life than reflecting on my vomit. Greater things have happened in my life since that incident. It's uncalled for.

Yes, the memory is still there. There's no way you can talk about Anita Hogan without linking it to the scandal.

There's no story that will be written about me without a mention of the scandal. It has become an integral part of my being. But I owe myself the duty to move on, and live a very fantastic life. I know that what happened to me could happen to anybody in the entertainment industry.

My advice to whoever l becomes a victim of this kind of scandal to take it as one of those things, learn to adjust and move on with one's life.

But you have forgiven the culprits?

Before anything happened, the first thing I said to them was that I have forgiven you, guys. Everybody that was involved in that malicious act, I have forgiven wholeheartedly. I don't give a thought over the matter anymore. It's not worth it.

Are you doing anything to document your sad experience?

Of course, not really documenting the experience per say, but basically, I'm writing a book to let people into my inner mind; perhaps to give them access to discover who really Anita Hogan is. After that horrible experience so many people have been asking what happened or what keeps me going; But here, I want to let people into my mind; to let them know what inspires and makes me strong after that sad experience. These are the things I really want to capture in my forthcoming book.

Do you have any regrets?

I can't call it regret, but mistakes. I have made so many mistakes in life. And I can admit that one of my greatest mistakes in life is trusting people to a fault. I'm this kind of person that can afford to give out what is more precious to me to a stranger without minding the implication of my action. I trust people a lot, and I think it's my biggest flaw as a human being.

How do you describe your husband?

He's a wonderful man, a father, a friend and a motivator. In fact, he's anything that a husband should be to a wife. He's the best thing that has happened to my life.

Where lies your strength?