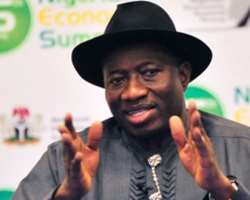 African Women in Diaspora threatened to go on a seven-day sex strike if Jonathan does not publicly declare his interest in the 2011 election by Friday, August 27, 2010. The group issued the threat in a press statement signed by the Communications Officer of the group, Mrs. Patricia Oreremi Badejo after their inaugural meeting.
***
Just 7 days without sex? You should be doing at least 6 months..you nymphos!
Ha ha ha!