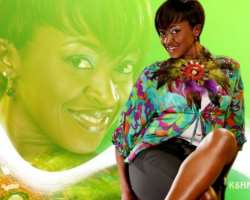 YOU actually studied science in the university?

I studied medical biology, but I'm living my passion which is entertainment. Someone said to me that the sweetest thing you can ever get is being paid for something you love doing, something as easy to you as sleeping and waking.

Is there any occasion where you have had to put what you studied into practice?

I have sometimes had to apply my knowledge on set where there is a laboratory and I can show people the proper way to tackle medically related issues. No knowledge is lost in life.

You have been married to your husband who is not actually a Nigerian for so many years...

(Cuts in) what's wrong with that? There are people who are married to Indians...

Tell us about it, do you enjoy it?

I enjoy it, it is perfect, it has been 11 years and I am still there, nothing has happened.

So if you should compare it to being married to a Nigerian...

I'm not comparing because I don't know; I have not been married before.

If you were to do it again, would it still be a white man?

He will still be my husband, whether he is white, orange, black or green, you people should leave this white man, plenty people are married to white men all over the country.

Have you ever thought of producing your own movie?

Yes, I have, when the time is ripe I will produce my own movie.

What is going to determine the right time?

The right people, the right script and money of course, everything involves money. I don't want to do a three million, four million film. I want a film that I will be proud of anywhere I go. I don't like to rush into things, I am a perfectionist, if it is not worth it, I would rather not dabble into it.

Apart from Globacom and Onga endorsement, which other deals are you involved in?

I do a lot of charity work. I'm a golden link for the prevention of cervical cancer in the country. There are also other bits and pieces that I do just to contribute my own quota to the society.

Which one gives you more fulfilment?

Everything, I always look out to do more, find causes that I am very passionate about and lend my support to them in any way that I can.

How do you fashion out time for everything?

There is a timetable, they give me their schedule and I make time for them, I am a very organised person.

How do you combine home-keeping and all these activities?

It is easy. My husband is very supportive; he allows me do my work.

If you were not in the entertainment industry, where would you be?

You don't think you would be a chef?

(Laughter) like have a kitchen or something? No if I am going to be a chef I will not be there always. On the day I am coming, that will be the day people will know that I am there and that day the meal will be extra special. The days may be two Fridays in a month, first Friday and last Friday and the place will be shaking because people will be filled with expectation.

Apart from entertainment, are you investing in any business, keeping money aside for a rainy day?

I cannot tell you that, it is my personal information.

You can tell me that you are doing something...

Have you always been shying away from investing in stocks and shares?

Yes, because I don't know how they make the money. I would rather keep my money in the bank. Or invest in buildings.

What if you keep the money in the bank and the bank collapses or becomes distressed?

I have been very blessed; it has not reached my side. God knows I work hard for my money, I don't steal it, so my money cannot go like that. Nothing can happen to my money wherever it is because it is not stolen money.

What is your assessment of what is going on in the Nigerian movie industry?

There is recession and the producers are complaining that there are no jobs. Why won't they complain when they are doing part one to four and part one to five films? People are getting tired of wasting their money on stories that last forever. One part film is enough but because they are greedy and they want to eat from all corners. There is economic recession all over the world but people also have to watch their pocket and watch their pennies. If you have a good story a part one and two will suffice or even a part one, I don't know why it has to go into three, four and five and at the beginning of part two you will see half of part one inside it. It is just the result of greed.

What about the fact that they have all these unions that are breaking into factions?

There is no standard, there was no blueprint for this industry initially, the thing kind of started on its own and there is no proper structure, everybody is just doing what they like.

So what does that say about the future of the industry?

They have to get organised, we are already losing it. We paved the way then musicians came from the back and overtook us. Even the Yoruba movie industry appears to be more organised than the English movie industry.

There was a time we were actually comparing ourselves to Hollywood...

Never. I repeat we can never compare ourselves to Hollywood; they are miles ahead of us, eons and centuries away from us. The only thing we can say we have is our stories but it depends on the way we sell them. We can't even begin to compare with Hollywood, there is no way. Yes we are the second largest in the world but that is based on the quantity of films we sell, not on technical know how.

What has been your most recent job?

I did a Yoruba film of recent. I did a film called Etiketa with Saheed Balogun, Uncle Olumide, Doris Simon and a few other people, the film was directed by Daniel Ademilokun.

You actually preferred it to English films?

Oh yes, they are so organised, they pay close attention to detail, costuming, make-up. They were together. I know how many times on set where some Yoruba actors or people doing Yoruba films will just come and offer to help Saheed. People that were not even working and were not required on the set came in and offered to help. We don't have that in the English film industry.