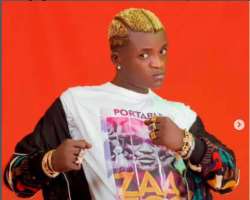 Singer, Portable has come out to decry resentfully over the fake Naira notes sprayed on him at an event in Rivers State, Port Harcourt to be precise.

In a recent video on Instagram, Portable revealed bitterly over the fake money spent on him in Port Harcourt.

He critically blamed the effect on Ninja, Hausa, whom he described as "Buhari people". On this account he declared that they had caused trouble and he may possibly get back on them.