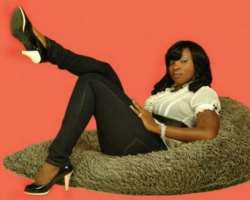 Popular Nollywood actress, Anita Joseph definitely has so much to thank God for as she recently came very close to kicking the bucket on a film location.

The curvy actress recently escaped death by the whickers while on location of the movie, 'Titanic Hustle.'

According to a source, the episode was so traumatic for the actress that she nearly quit her career as an actress after the ugly incident.
In the movie, Anita Joseph played the role of a woman who mistakenly killed her husband and was so devastated by her role in her husband's death that she decided to hang herself in the movie. Incidentally, it was during the act of shooting the hanging scene that disaster struck. While trying to get her neck into the noose and keeping her feet on the raised platform, disaster struck as what was supposed to be a make-belief hanging scene turned real and Anita Joseph almost got herself killed as the noose tightened around her neck and she simultaneously lost her footing.

“I don't know what happened. I think they forgot to pull the rope or something and I almost died. Though it was a mistake, when I came down, my eyes were turning and I almost quit,” she said.

We're all happy the chocolate-complexioned actress survived the incident and we hereby urge movie directors and their props teams to be more vigilant and avoid such costly mistakes.