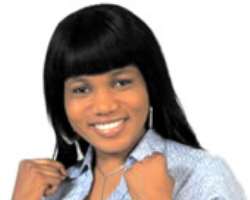 Olabisi Komolafe has carved a niche for herself in the Yoruba movie industry. The graduate of Business Administration from the Lagos State University speaks with SEYI AKANBI on how the industry has shaped her life.

WHAT do you like most in acting as a profession?
It gives room for play while working. While acting, I still catch my fun, and at the same time, money is coming in. I enjoy myself when acting. I don't feel like I am working then. Unlike other professions where you sometimes get bored while working, acting is fun. Moreover, I earn good money from it.

What is the maximum amount you have ever earned?
It depends on the nature of the job, the personalities involved and the proximity of the location. But then, if I tell you what I earn, I may find it difficult to get somebody to pay me above that. But the truth is most actresses are not as rich as people think.

Many have the impress-ion that you ladies get money, cars and other gifts from men who adore your beauty.

I don't get any money from any big man, but I do from my boyfriend. And I don't think it's a big deal getting money from my man. Those who are not actresses get gifts from their suitors, if any actress gets money from her boyfriend to buy jeep or whatever, there is no big deal about it. It means the guy appreciates her. That's all.

It's also believed that most of you are very expensive compare with other ladies and that is why you usually date big men or overseas guys.

What gives you the impression that these guys are richer? There are lots of Nigerian guys who are rich and can spend lavishly for their girl friend, even more than what an overseas' guys can spend, it's just a matter of luck. Big men or no big men, overseas guys or not, the most important thing is that the person loves me, cares for me and he is ready to take me for who I am.

Are you saying you don't have any overseas admirer?
When I am not a cripple. A lot of Nigerians call me from every part of the world, young, old, married and single, male and female, who love and appreciate me and my works. They are my fans. I respond to them that it is now more than telephone conversations, many of them have become my good friends.

What about those who insist to take you out on a date?
I always tell them I am busy. Besides, I can't go out with them because my man won't take it lightly with me. But the truth is most of them are not of my taste.

What do you want in a man?
I like somebody with low profile, but who is ambitious and intelligent. I believe I have much to gain from such a man. I like someone who will be like a father to me, not even like a father, I will love to marry a father as a husband.

That means you do not like your fellow actors or marketers
I like them because we are in the same industry. For an actor, may be if God says so, we could have a thing, but definitely not a marketer. Most marketers we have around are married and if I am looking for a man to marry, it wouldn't be a marketer. I will not like to be a second wife.

But why did you take your time before answering that question unlike former ones.
I think I have the right on whether to answer any question or not.

Does that mean you do not have any ugly past you would like to hide from the man you are going out with?
Not at all. I told him everything about me, the people I have dated in the past, my background and everything. I opened up unto him.

What about sexual harassment?
I have never been harassed sexually. And if I have gone out with someone in the past, it is because I wanted to. I am liable and responsible for whatever decision I have taken in the past, not that I was harassed or coerced by anybody.

What about those who demand sex before assigning roles?
Abba, that is not possible any longer. Why would someone demand sex before giving me a role when lots of people, who I have never met in my life, call me that they want me to feature in their movies. I don't think any actress needs to sleep with anybody before getting roles.

What about up-coming actresses?
Maybe, but I can't be categorical.

That means it is possible you too slept your way into stardom?
Why would you say that? How would I? I did not sleep with anybody before I became who I am today. Thank God the caucus I belong does not even encourage that. Our elders trained us to become who we are, not by sleeping around.

How was your first experience on set?
Wonderful and embarrassing. Lots of eyes were on me, and I was a shy person then. I could not talk. But now, I can talk from morning till evening. I never believed I could face a crowd. The industry has changed me positively.

What motivates your dressing?
I think my mood and where I am going normally determine what I put on. If my boyfriend is taking me out, I will make sure I dress as sexy as possible.

What are the challenges you have faced in the industry
I think it is trying to act out roles that have no bearing with me as a being. This often make people form opinions about me. It amounts to living a fake life.

What do you think people will miss if you decide to quit acting for any reason?
I don't know. Maybe my natural approach to life, or roles that I would have played. I cannot actually say.