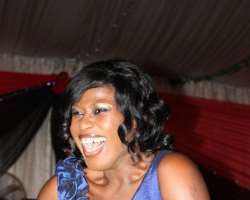 The past three years has witnessed a big leap in movie production in Nollywood. The industry has in this period witnessed the rise of didactic story lines modern directing and production of movies that match up with the second rated movie industry in the world called Bollywood.

This report focuses on the achievements of these actors and actresses in changing the industry for better, and moving it to the next level.

Uche Jumbo: This popular screen goddess and Glo ambassador has scripted series of block buster movies such as 'game men play' before venturing into movie production late last year. She produced the high quality picture movie titled 'Hollywood Hustlers' which extrayed controversial story of life in Nollywood with state of the arts equipment that gave the movie that standard which Bollywood has used as an edge over the Nigerian movie industry.

Desmond Elliot: Star actor Desmond Elliot is a household name in Nollywood. He produced “Shit on the Kak' which went home with an award. Early last year, he made 'Before the Light' a movie that saw the light of the day in 35mm format and was premiered in TV's GAMA Film executive theatre. From last year till date, Desmond has co-produced three movies with Emem Isong one of such movies is 'Guilty Pleasures' which was equally premiered in Ghana. Aside turning a superlative movie producer, Desmond equally directs his movies.

Kunle Afolayan: Top actor turned producer hit the industry with 'Irapada' a movie he produced in 35mm format, he also dazzled movie buffs with 'The Figurine' also produced in 35mm format on the premiere of this movie on Silverbird gallerie, Kunle projected Nollywood as an industry where movies should possess word standard story lines and high picture quality.

Vivian Ejike: She has been a movie producer for many years. In December last year, she premiered her movie titled 'Silent Scandal' which has been rated among the high quality picture movies. Apart from the twisted and suspense filled story line, the movie was done with state of the arts equipment which rates at par with the 35mm format and premiered at Silverbird Cinemas.

Jeta Amata: This vibrant actor, producer and director will stand tall as one of those who pointed the way to the best practice in movie making with his production of the wave making picture 'Amazing Grace' which grabbed attention not only in Nigeria but also internationally.

Kingsley Ogoro: Years after masters like Hubert Ogunde, Eddie Ugboma etc did their stuff; it was Kingsley who took the initiative of doing movies in celluloid format in this generation through his flick, “The Return'. Although the movie was not a commercial success, it opened the vista for the return to making films in the big picture format.