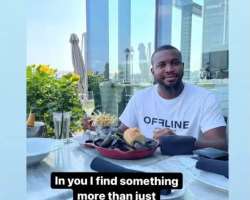 In You, I Find Something More Than Just Friendship" that comment buzz the internet as the controversial actor and model, Nkechi Blessing expressed love for her new man.

Popularly known as NBS, the delectable actress known for her reprisal roles in Yoruba movies has called out critics who posit that her lousy nature marks her negative.

People from her fanbase know that it's not new that her romantic relationship with a man she spends quality time together with for months ended but it's obvious that she has moved on for something better since then.

Nkechi Blessing Sunday took to her social media account via her IG to share a new picture of a man which she might have considered her male friend.

She posted these picture with an interesting caption and prayed for his protection.

She added that she is saying this with loads of love but Nkechi Blessing never made it clear to her fanbase if she is in another romantic relationship with this new man and she might be revealing this anytime soon.