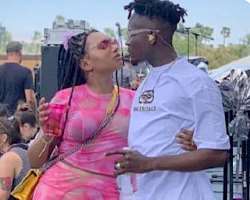 Daughter of billionaire magnate and Nollywood actress, Temi Otedola has reacted after her fiance, Mr Eazi celebrated himself on father’s day.

Recall the love birds had proposed to do a quiet wedding of just family and friends as guests.

Joining other Nigerian stars who are celebrating their spouse and fathers, Mr Eazi took to Twitter to share a cute photo and wished himself a happy father’s day.

He wrote: “Happy father’s day to me”

Mr Eazi is not married, let alone being a father, and the post got some fans surprised and thinking if he has a child.His soon-to-be wife, Temi Otedola, also seemed confused and questioned the tweet.

Temi Otedola while responding to the tweet wrote: “I have questions”

While some fans claimed Temi might be expecting a child with the singer, others urged Mr Eazi to clarify his post.

Below are some of the reactions that follow suit. A user by name, Official_melly14 wrote: “Na only una two dey enjoy relationship”

While, ayzne_ replied : “Temi what are you trying to tell us, he will soon be a father”

Another, official_timmy7 wrote: “It’s obvious say the babe don get belle, na brain dem one use take tell us”

While, fheytiii wrote: “we are as confused as you are Temi dear”

What's your opinion on this post? Do you feel Mr. Eazi and Temi are throwing us a stunt?