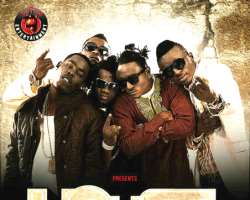 Luckily enough for the group, a marketing deal was earlier this week finalised with a major marketer in Alaba, Lagos.

“Everything is set for the successful release of 8th Mainland Bridge. We have secured a marketing deal which we are happy about. We are set to roll,” said an excited member of the crew.

Entitled 8th Mainland Bridge, the album is a 12-track collection featuring the signature racy beats of Terry G and the diverse talents of the members. The crew is made up of Terry G, his younger brother, Oche Amanyi (D Money); Ugochukwu Ikpeama (Rakwell); Aliu Shoaga (I.Q) and Dare Egerega (Prince Banton).

The House of Ginjah follows hot on the heels of Mo'hits which first album was a roaring success.