Star Woman, Beyonce Is BACK 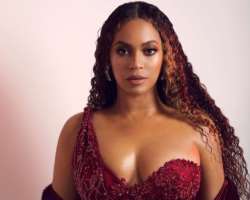 Super star pop musician, Beyonce Knowles Rockefeller is back and better. Beyonce surprised fans on Wednesday by announcing she will be releasing new album titled in appreciation, " Renaissance" which is due to be released on July 29 this year.

She juxtaposed her decision with the July issue of British Vogue which is available via digital download and on newsstands from Tuesday next week.

The 40 year old superstar who released her last album Lemonade in 2016, wore an incredible gold metallic hooded dress which had a plunging neckline and showed off her incredible curves

'@Beyonce is poised for her next evolution, one that promises vision, grace – and something a little bit extra... In the July 2022 issue

One of the image sees the musician wearing Junya Watanabe leather and chunky Harris Reed And Roker platforms boots as she lay across a motorbike, while sporting black lipstick, while smoke fills up the front of the frame.

The mother of 3 ( Blue Ivy, twins Sir and Rumi, ), then sat atop a horse on a dancefloor for the cover image wearing a skintight black dress and giant headpiece for an image shot back in April, post-Oscars.

Editor-in-Chief Edward Enninful styled and interviewed the superstar for the iconic shoot, revealing: 'New music is coming - a thrilling abundance of it.'