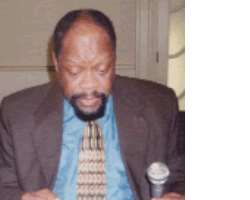 Ojukwu
It was Chief Chukwuemeka Odumegwu Ojukwu who said few years back that the story of man is a chronicle of oppression, and therefore man is born oppressed and all his life, man struggles to free himself from the clutches of oppression, repression and suppression.

This is the more reason why men who are men who have managed to tear themselves away from the forces of oppression stand up to fight for those who are still down all over the world. Such great men believe that evil triumph in every society where good men do nothing. These seasoned men of conscience and honour know that the hottest places in hell are reserved for those who maintain neutrality in times of great moral crisis.

When Walter Carrington landed in Nigeria in October 1993, Nigeria was in a deep political crisis and at best in a war situation. Timothy Writh, the State Department Counselor US Embassy Lagos captured the situation vividly when he said at Carrington's swearing in ceremony that 'These are troubled times for Nigeria and Walter Carrington is an emissary with the experience and poise to properly articulate to Nigerian people America's position on basic principles and inalienable rights'

While presenting his letter of credence to the then Head of Interim Government headed by Chief Ernest Shonekan, Carrington lamented that 'It is a moment of considerable emotion for me to return to a nation whose potential for greatness is the envy and the hope of the sons and daughters of Africa wherever they may be. We, like you, had great hopes that the elections of June 12 would lead to a permanent restoration of elected civilian government. Like you our hopes were dashed by the annulment of those elections.

How you will go forward from here to accommodate the sovereign will of your people is of course a decision that only Nigerians can make' 17 years after, we are still talking about free and fair elections and genuine democracy in Nigeria. A great son of Africa, married to Dr Arese, an Itsekiri doctor from Nigeria. Carrington sees himself as an ordinary Nigerian and stood on the side of the people in those years of the locusts. As an Ambassador to Nigeria, he saw the evil that was the government then and bluntly refused to do business with the junta.

He publicly identified with the opposition, the human rights and pro-democracy activists and Abuja did not like him for this. I am sure they worked tirelessly for his redeployment in September 1997. A send forth party was organized for him at the late Pa Onasanya in Surulere and by the time guests got there, police and other security agencies had sealed off the venue.

The event was quickly moved to another venue unknown to the operatives. The following day Dr and Dr Mrs. Carrington was at Idi-Ape in Ibadan at the instance of Chief Oluwale Kuye who organized another send forth party for them. The photograph of the Carrington's in traditional Yoruba attire dancing away in a blaze of glory became the best photograph I have ever seen in times of trouble. I captured that great photograph in my book: Heroes of Democracy.

As Nigeria prepared for Democracy in 1999, Carrington warned: 'If Kudirat Abiola and her husband, Moshood Abiola and other martyrs to General Abacha's tyranny are not to have died in vain, then Nigerians must rededicate themselves to the cause of human rights, democracy, true federalism and of government accountable to the people'

Whether the powers that be paid attention to that advise is subject to discussion for another day.

At 80, I see Walter Carrington as a great man who came to Nigeria saw the evil leaders and refused to wine and dine with them but chose to identify with the ordinary people. And it paid off. Carrington is a historical necessary and an agent of change. Happy Birthday Sir!