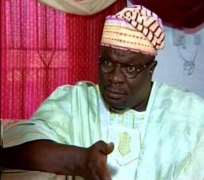 Veteran actor, who was popularly called back in the days as Chief Koko, a troublesome landlord in the rested TV Series, Koko Close, has confessed to have started smoking Marijuana at age 15.

Olumide Bakare the cross over artiste, who has also taken part in so many block-buster movies and soap such as Wale Adenuga's Papa Ajasco and Company, amongst others, reveals that one of the actions he took while growing up was to smoke Indian hemp. He even confessed that cocaine was not new to him, though; he cleverly avoided the question on whether he ever sniffed it or had other things to do with it.

“I have been smoking Mariajuna since I was 15 years old, through my Secondary school days and the University, even till I joined NTA and became a television star. I had some friends who were military guys, then, cocaine was the game of the boys. Let me just confess to you that, what drove me into smoking hemp and other things was because I couldn't help it, coupled with the fame I have achieved then.”The chubby-checked father of three confessed.

In 1998, Bakare said he got over it and finally stopped smoking by divine intervention. Chief Koko though has three children from two mothers, none however stays with him and for those who haven't come across him before, he is an 'ineligible bachelor' who is searching for a soul mate at 50, www.nollywoodgists.com discovered.