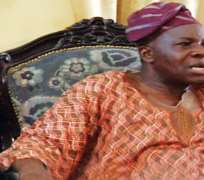 And for a man whose acting experience span more than four decades, it's easier to remember his first day on a movie set than for him to recall the number of roles he's played in movies. “I have featured in more movies than I can remember” he told this reporter.

Caught recently in the web of our roving correspondent Aramide Pius at a new movie set he starred in, Baba Wande whose roles in movies like 'Saworo Ide', 'Agogo Ewo', 'Akobi Gomina', 'Arugba' among others, set him apart from his contemporaries, speaks on his career, the Yoruba movie industry and life as a family man. Excerpts;

Your roles seem more of a comedian than a real actor, has this comedy trait in you been from your childhood?

I don't know what to say about it but I can tell you that it is the Lord's doing and not my making.

As a growing child, was there any hint that you would end up being an actor?
There was no hint to that effect at all.

So how did you get into acting?

Like I said earlier, all gifts come from God and mine is not an exception. I can not explain how I found myself in this but all I know is that I'm in it (acting) and I'm enjoying it. People say I'm a comedian but I don't know why they say that.

After all I'm not Baba Suwe or Latin (known movie comedians); I only speak the way God created me to speak and people believe that it is comedy.

The way you speak in movies is amusing. Is it naturally?

Which of your movies do you found challenging?
I am yet to find one that actually challenged me. Most of them I did with ease. Whenever I'm on the stage, I just flow naturally as if I'm just playing.

How do you juggle between the home front and the job?

There is no problem with that at all. Whenever I have jobs to do I do them. And if it requires me travelling I do so. When I'm done with job, I return home to my family.

They know the type of job I do and they understand it so I do not have problems at all with my family. They know the challenges of the job I'm into.

Which of the artistes would you say you enjoy working with the most?

I enjoy working with anybody that comes my way as long as the person is good and is a professional. When I talk, that person should be able to answer me well and I'll give the person the right response. Those are the type of people I like to work with.

Has any of your children indicated interest in acting?

Yes they are interested, but at present, all f them are in school and I want them to get the education first before joining in the art. I know that being educated is a great advantage to anything in life.

Whatever their choice of profession, if the educational background is there, it will make a lot of things easier for them and they will become successful in no time.

Do you think you would have been a better actor if you have been more educated?

If I were more educated than this, I probably would not have ended up being an actor. I may have been a Television Director or Manager.

On the other hand, I thank God and I 'm happy because with acting I'm able to project my talent. But sincerely, If I was opportuned to have been more educated, I would have ended up in an office as a television manager or director.

The experience is not just about myself alone but it concerns everyone of us in this industry today and that is about the situation of things in the Yoruba movie industry. We go through all sorts in locations to shoot movies but at the end of it, the money realized is nothing good to write home about.

What do you think is responsible for this situation?

I think it's the way our movies are being sold. Our marketers are the ones enjoying the better part of the proceed than we the people who actually make the movies.

Could it be as a result of piracy or what exactly do you feel is responsible for that?

Piracy is part of it and another thing is the behaviour of the marketers towards the artistes. On a very candid note, they don't treat us well at all.

Looking back over the years, do you have any regret being an actor?

Not exactly. My only regret is the way we are being treated by the marketers. We do a lot to prepare a story. We look for money to shoot the film and go through all sorts of sufferings at the various locations to shoot a movie and at the end of it all, getting to the market, you will not be paid; that is my only regret.

Every now and then I just sit back to think on what can be done because we just toil and we don't reap the fruit of our toiling. It is really sad.

What do you think about the type of movies being churned out from the stables of our movie makers, do they meet international standard?

Most of our movies are not up to standard and it is due to the financial problems we face. Instead of the marketers to bring out good money for the artistes to shoot movies, they will bring amounts like two hundred and fifty thousand naira to shoot a movie.

I wonder how they think a good movie can be shot with such an amount This is actually common among the Yoruba movie genre, the Igbos are not like that.

The Igbo marketers give good money to shoot movies but the Yorubas don't. They give N250, 000 to N300, 000 to shoot movies. That is the reason we have poor Yoruba movies.

So you think the English speaking movies are better treated than the Yorubas…?

They are better in the sense of the amount their marketers give out to make the movies. But they do not have good story lines like the Yorubas.

The Yoruba movies have very good stories but there are no people to finance them well; that is our problem. We have stories, we have talented artistes but there is no money to actualize our dreams.

If you have your way, what would you have done about the situation?

If I were financially okay, I would have brought out money to do a very good film and find a way of selling it. But if you do not have money, there is no way you can be a marketer.

You have been acting for years and you have several fans across the globe, how do you feel when your fans see you in public and come after you?

They make me happy and I'm happy any time I see them. The only thing that worries me is the orientation they have about artistes. Most of the time, they always think that we are rich and that we have money which is actually not the case.

Most of the times once the area boys (street urchins) sight you, they will rush to you telling you that they want to eat out of the money you have made; 'we buy your films' and so on. They always think that the way we act in movies is the way things are in real life with us, which is not so at all. That is the only regret I have on that.

What has your being an actor done for you?

I have benefitted a lot by being an actor. It gave me exposure. It has enabled me meet different people from different walks of life that I may not have met ordinarily. It has also opened many doors for me and given me good will even in public places like banks, offices and what have you. It has really given me so much.

Would you say that the days of cinema watching are better than these days of home videos?

Both of them have their various advantages. We are not able to make cinema films anymore because of the economic crisis. And we could not have sat down with our arms folded without doing anything because of the bad economy! which is why the home video thing came into existence.

Which one is better: the cinema or home videos?

I would not say that the cinema is better because it is much more expensive. The only thing is that when you shoot for cinema (on the 35mm camera), there is no way you can produce a substandard film.

But with the home video, you have every Tom, Dick or Harry going into it and coming up with all manner of films that are substandard. Anyway, I think that half bread is better than none. If we can not afford to shoot for Cinema, we can still make do with the one we have which is the home video.

What advice do you have for up comers who are aspiring to be like you?

The only advice I have for them is that they should take one step at a time. Before you become a teacher, you must first of all be a student. Some of the younger ones do not want to take their time to learn well before getting freedom.

They think that Rome was built in a day, and life is not like that. I spent twenty five years with my master Doyin Adejobi of blessed memory before I became a master of my own. Some of them want to be over night stars without taking their time to learn the nitty gritty of the profession and I don't think it is possible to become a star without first learning the terrain of the profession well.

My favourite food is Gbegiri soup and Amala

I read my Quaran.

What other things do you do. Do you drink or womanise?

I don't drink. But on the issue of womanising, I can not lie about it . Any man, especially one that is in this kind of profession like us, will have friends and admirers.

How many wives do you have at home?

And are you planning to have more?

I may and I may not. I 'm a Moslem and by right I am supposed to have four wives.

If I have more than four, that means I have derailed form the word of God but if it is four, I am still on course.