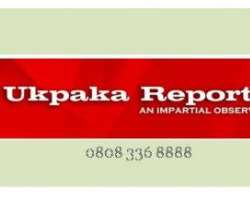 A monumental fraud running to the tune of N11 Million is said to have rocked the Warri branch of the First Bank of Nigeria , Delta state as the state police authorities begun investigations into alleged fraud.

The N11 Million it was gathered belonged to a customer of the Bank but was allegedly withdrew on her behalf by the Bank officials.

Ukpaka Reports authoritatively gathered that employees of the bank, one Augustine Ashioma, Ben Effi and Faith Akhere were quizzed by the police for alleged complicity in the disappearance of the customer's money.

Investigation reveals that the principal suspects, Ashioma allegedly transferred the sum of N11 million belonging to one Madam Joy Broka to private account allegedly been run by Akhere without the knowledge of the authorities of the bank.

Security source disclosed that Ashioma allegedly often use Ben Effi and Faith Akhere to lauder the funds which he fraudulently move from customer's account for money lending business and other sundry use.

It was not clear however whether some other customer's money were being transferred in same mode by employees of the bank.

The bank's Lagos headquarters, it was gathered purportedly gave police the approval to arrest the officials when the fraud was uncovered.

Sources said that the principal suspect who worked at the main office of the bank located in Warri/Sapele road and main market area of the Warri metropolis was alleged to have fraudulently moved the money to the female accomplice account from where he used the sum for private deals.

Investigations also revealed that Mr. Ben Effi was arrested at the Agbor branch of the bank by the police where he was quizzed.

The trio according to security sources were arrested after the alleged fraud was discovered in Lagos .

Sources disclosed that the owner of the account, Madam Broka had gone to the Lagos office of the bank to cash the money but was shocked to discover that her account has been empty of the sum.

She raised the alarm which led to the arrest and subsequently interrogations of the bank's officials.

Ukpaka Reports further learnt that the fraud was traced to the Warri branch of the bank following internal investigations by the bank.

The bank officials at the main office and Effurun branch situated at Enerhen area of Effurun, near Warri were however grilled after the principal suspect to the alleged fraud was picked up at Enugu by the Area Command where he had gone for a bank course.

It was however not clear whether the money have been refunded but security sources said the trio have since been granted bail under stringent conditions and asked to be reporting to the police while investigation continues.

The Area manager of the bank however declined comment when contacted saying he was not competent to speak on the matter.

When contacted for comments, the suspects declined to speak but Police spokesman in the state, Charles Muka, an Assistant Superintendent of Police confirmed the report saying that investigation have begun on the alleged fraud.