ACTRESS ZSA ZSA GABOR IS TAKEN TO HOSPITAL AFTER FALL 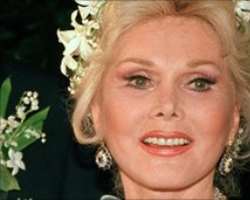 Veteran actress Zsa Zsa Gabor has been taken to hospital after falling out of bed and breaking several bones, her publicist has said.

John Blanchette is quoted by AP news agency as saying the Hollywood star was watching television in her California home when the accident happened.

Gabor's husband then called an ambulance and she was taken to Ronald Reagan UCLA Medical Center.

The condition of the Hungarian-born star, who is 93, is not known.

Gabor is partially paralysed and uses a wheelchair following a car accident in 2002.

She also suffered a stroke five years ago.
Gabor starred in films such as Moulin Rouge, Lili and Touch of Evil.