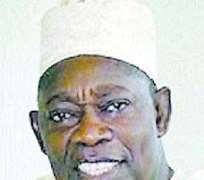 Late Abiola
Twelve years after he died in prison, he still lives in the minds of his kith and kin in Abeokuta , Ogun State capital, who penultimate Wednesday remembered him for what he stood for.

The rich, the poor and even the peasants, some of whom were beneficiaries of his kind-hearted and generous life all paid tributes to the late Bashorun MKO Abiola, the acclaimed winner of the historic June 12, 1993 Presidential Elections.

Ogun State Governor, Otunba Gbenga Daniel paved the way for the remembrance of the renowned business mogul and publisher of the defunct Concord Press by declaring the day a work-free-day for all civil and public servants in the state.

His memory was enlivened by a lecture organized by the state Campaign for Democracy (CD) under the leadership of Comrade Lanre Ogunyika who was also an active player and victim of the tyrannic years of the late despotic leader, General Sani Abacha.

In his welcome address at the ceremony which held at the NUT Hall, Kuto, Ogunyinka said,

'Today, 12 years after they killed him, the socio-economic life of our nation keeps dwindling day by day significantly by indices of unabated corruption of high proportions, insincerity and greed of our leaders.'

Obasanjo and his team that were imposed on us should be held responsible for what happened to us since then. They are much guiltier as the evil genius''.

Despite what he described as triple blights of poverty and disease across the country the (CD) leader urged Nigerians not to relent in upholding the spirit of June 12 which he said transcends the tribe, the marks, the tongue and the religion.

During the ceremony that was attended by other pro-democracy groups, labour leaders, market women and members of the National Association of Nigerian Students, (NANS) the first daughter of the late Presidential flagbearer of the Social Democratic Party (SDP), Hon. Lola Abiola-Edewor also paid glowing tributes to her father.

Abiola-Edewor, who also spoke on the need for Nigerians to have credible elections next year and also urged the National Assembly to ensure that the Independent National Electoral Commission (INEC) gets necessary autonomy.

The independence she stated would ensure that the electoral body conducts credible elections that would forestall annulment of elections in the country. According to Abiola's daughter, full autonomy and independence were necessary for Nigeria's electoral umpire so as to guard against a repeat of the political and eocnomic upheavals that trailed Nigeria after the annulment of the historic elections.

She recalled the outstanding contribution of her father, saying that nothing could make INEC to meet the aspirations of Nigerians on the INEC than the autonomy she is canvassing. Her words: ''The lesson of June 12 and Abiola's struggle should be etched in our history. I therefore call on the National Assembly to quickly round up their constitution amendment and give INEC the kind of independence and autonomy required so that no annulment will be recorded in the country again. If INEC had been properly independent and autonomous, nobody would have been able to annl the election that we had 17 years ago''

Ogun State Commissioner for Water Resources and Rural Development, Akogun Kola Onadipe who represented the state government at the event said Abiola would forever live in the minds of Nigerians because of his immense contribution to the realization of democracy.

He noted that if the late business mogul had been given the opportunity to exercise his presidential mandate, many of the problems confronting the country today would have been permanently resolved.

The Coordinator of Coalition of Democracts Against Rigging (CODAR) Barrister Bisi Adegbuyi who spoke during a rally jointly organized by (CODAR) and the Action Congress (AC) at the Ake Palace Square which was attended by former governor Aremo Olusegun Osoba said Abiola would never be forgotten and urged Nigerians to protect their votes.

''You know Abiola abhored cheating, he abhors poverty, he hates religion discrimanation and tribal sentimental, so let all of us keep his memory alive by fighting agianst all those things he disliked while alive.

'' We are happy with Jonathan that he agreed that Abiola's death was the foundation on which Nigeria's democracy is built. Abiola will never be forgotten as long as there is democracy in Nigeria.

He also canvassed digitalized voters register as well as simultaneous accreditation of voters across the country. ''It is after all these that Nigerians votes would count.'', he concluded. Osoba in his presentation, urged President Goodluck Jonathan to probe the tenure of the former Independent National Electoral Commission (INEC), Professor Maurice Iwu.

The ( AC) chieftain who described the new (INEC) chairman, Professor Attahiru Jega and his members as credible people however added that there are some disgruntled elements within the Commission that still need to be flushed out if the cries of Nigerians for a credible election would be realized.

'As much as the credibility of the new chairman of (INEC) is not in doubt, I want to state that there are still some disgruntled elements within the Commission that still needs to be flushed out if Nigerians votes would count'.

Osoba told the gathering which included his former Deputy, Alhaji Gbenga Kaka, the Coordinator of (CODAR), Barrister Bisi Adegbuyi and other AC chieftains that Iwu in his hand-over not admitted that a lot of politicians lobbied him to scuttle the 2007 elections.

The former governor also said that Mrs. Ayoka Adebayo who initially refused to be used for hatchet jobs in Ekiti also needs to be flushed out of the Commission. ''If Jega must conduct a credible elections for Nigerias, there are people within the INEC that must be shown the way out''. 'Jega is only one man, Olorode is also just a one man. One man they say does not make a forest. They must ask for free hand, to re-organise, to re-invent INEC.'

The Press Club of the Moshood Abiola Polytechnic (MAPOLY), Ojere, Abeokuta also urged wealthy individuals to emulate Abiola by giving back to the society, which produced them.

According to them, Abiola left behind unprecedented achievements some of which the students of MAPOLY are still benefiting from, up till today. 'It is worthy to note that the late philanthropist single-handedly bought buses to convey students to and fro the polytechnic, built an ultra-modern library, regarded as one of the best in any state-owned institution, just as he put in place the only clinic in Ojere community till date.

According to the President of the Press Club of the Polytechnic, Mr. 'Leke Baiyewu, the late publisher's legacy would remain relevant as long as MAPOLY exists. ''Abiola knew the value of education and invested much of his wealth in it. MAPOLY, among other institutions, has physical evidences to prove his interest in youth development.'

This, the Press Club, believes inspired the founder of Kessington Adebutu Foundation (KAF), Sir Kessington Adebutu, and the Chairman of Bi-Courteny Limited, Mr. Wale Babalakin (SAN), among others, who have donated multi-million naira structures to MAPOLY.

'It is unfortunate that one of the problems facing Nigeria education sector is the lack of infrastructure, which is causing poorly teaching and learning and, as a result, endanger the career of Nigerian students: the leaders of tomorrow: the future of this nation''.

The club calls on the private sector and corporation organizations to 'be socially responsible by assisting the government in providing necessary and relevant infrastructure on campuses, so as to salvage the future of Nigerian youths which is bleak'', the student stated.