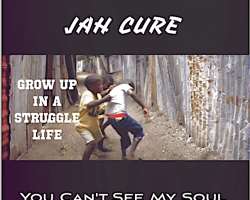 Jah Cure recently released a track entitled
"You Can't See My Soul"
It is prompting people to call out similarities
with the song and incidents in the singer's past years,

leading up to his most recent accusations.
The song starts off by saying:
You can see my clothes
but you can't see my soul
Let he who is without sin,
cast the first stone
He who feels it knows
Other parts of the song alludes to earlier life and says

Grew up in a struggle life
Had to realize,
I could save myself
but I couldn't be somebody else
Watch the video here and see for yourself

(Media: MJ Ent )
In the midst of his current trial - no pun intended - and tribulation, Jah Cure is now sharing the lyric video for his song featured on the recently released Rock All Riddim. The tune is titled You Can't See My Soul, and after carefully listening to the words the consensus among several of his fans and supporters is that he seems to be struggling with a lot of demons.

The Rock All Riddim, which is produced by Reggae Vibes Music, was released at the end of August. This means that Jah Cure's song would have been written and recorded long before that date, giving the production team sufficient time to mix and master it. However, the lyrics in the song gives the impression that it was authored after his arrest in the Netherlands.

For those not familiar with the story; the beloved reggae singer is currently facing charges on the primary suspicion of attempted murder, as well as attempted manslaughter and aggravated assault after an altercation with a promoter in Amsterdam at the beginning of October.

However, "Let he without sin cast the first stone." These are words uttered by Jah Cure in You Can't See My Soul.

With the lyric video now out on YouTube it is becoming apparent that despite his difficult upbringing Jah Cure has been trying - challenging as it maybe - to become a better man. Our only hope is that his arrest in Europe does not deter that.

Watch "You Can't See My Soul"