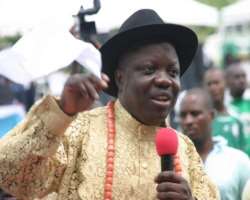 Some loyalists of foremost Ijaw leader, Chief Edwin Clark, the Action Congress governorship candidate in the last election, Chief Peter Okocha and former Governor, Chief James Ibori were some of those who opposed Uduaghan’s bid at the political gathering.

Present at the town hall meeting which held at the Orchid Hotels, Asaba were Senator Adegor Eferekaye, representing Delta Central, the Political Adviser to Clark, Chief Ominimini Obieuwevwi and some Ibori loyalists at the state's House of Assembly, Hon. Abel Oshevire and Friday Onodjae, both representing Ughelli I and II constituencies.

In a communiqué at the end of the Town Hall meeting, jointly signed by the Chairman of the forum, Chief Joe Onyekpe and nine others from across Delta North Senatorial District, they accused Governor Uduaghan of squandering the state's N650 billion within three years and described Uduaghan's three years as governor as "a project of monumental deception."

According to them "We make bold to state that Governor Emmanuel Uduaghan's entire regime is a project of monumental deception that has nothing to show for the over N650 billion so far collected from the federation account since its inception in May 29, 2007. We the Anioma people hereby pass a vote of no confidence on Dr. Emmanuel Uduaghan and his administration and state further our resolve to disassociate our area and people from his illusionary and greedy second term bid."

While hailing the appointment of Prof. Attahiru Jega as INEC boss, the forum commended Clark for his "resilience and belief in a just, egalitarian and free society." It unequivocally supported President Goodluck Jonathan for 2011.

Earlier, Chief Ovie Omo-Agege, former Secretary to the State Government (SSG) during Ibori's administration who was adopted for 2011 by the forum lambasted Uduaghan for parading Ibori's projects for commissioning by President Goodluck Jonathan after three years in office.