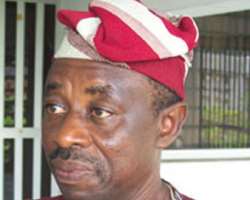 Disillusioned film maker, Tunde Kelani may have to wait upon the Lord's intervention to bring to book the culprits who pirated his film, “Arugba” a week after it was released into the market.

This is because the government regulatory body that's responsible for the protection of intellectual property, Nigerian Copyright Commission(NCC) has proved to be helpless in this regard.

The Commission, instead of wielding the big stick and ensure that the culprits are brought to book, is compelling Kelani to raise the huge sum of N1.7 million to enable them conveniently carry out a raid at Alaba International market presumed to be the haven of piracy in the country.

For NCC, the amount covers the cost of providing logistics and other incident expenses that is likely to arise in the cause of carrying out a raid on the pirates.

In a situation report, written by Kelani's lawyer, ABFR &Co, and dated 19th of March, 2010, which was shown to Showtime NCC argued sheepishly that owing to the Federal government plans to close down the market permanently, they have decided to be silent on any issue relating to the menace of piracy in that market.

The letter reads, “On possible action to be taken in respect of the pirated movies of Mainframe Productions Limited, the sum of N1.7 million will be needed as cost of providing logistics and other incident expense to carry out a raid at Alaba International market. We have been silent on issues of piracy concerning the market because of the plan of the federal government to close down the market permanently.”

Meanwhile, describing the pirating of the movie as “threatening his career and life”, Kelani who's one of the nation's best film makers said, owing to this ugly development, he may not be able to make as many films as he used to do during this year.

“ I have lost all my investments to pirates. Since October last year, I and my sister have not received a kobo from our sweats. It's discouraging. Government cannot guaranteed the protection of our works.” he lamented.

Continuing, he said, “unless the Federal Government of Nigeria rescues us from this economic menace, the growth and development of the nascent film industry in Nigeria will be stifled completely by this miasma of piracy, illegality and outright theft.”

“The popular Nollywood industry is under great threat and may already be experiencing its death throes. While we have decided to write a letter of protest to President Goodluck Jonathan, the Attorney General of the Federation, The Federal Minister of Information and Communication, the Inspector General of Police and all the relevant government agencies, we can only appeal to the general public to ignore the pirated ones and buy our genuine movies.”

Kelani's “Arugba', shot in 2009, was released into the market on June 13. A week after its release, two pirated versions of the culturally infused film flooded the market. No thanks to pirates.

Written by Ade Adeniji and produced/directed by Tunde Kelani himself, Arugba is set against the backdrop of a corrupt society seeking cleansing, rebirth and nationhood, with all the attendant intrigues. The film, according to Kelani, is based on experiences got at the annual Osun Osogbo festival and the latter's inspiration from his previous documentary about the festival.