An Interview With Ntando Sgudla, An Influential Supermodel From South Africa 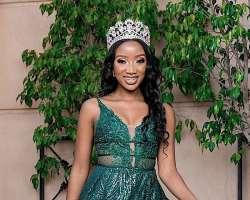 Ntando Sgudla began her modeling career in 2018 and won her very first pageant as Miss SA Teen Ambassador 2019. Miss SA Teen Title opened so many doors for her and brands across the world approached her to become their ambassadors. She loves modeling and many people love to look at her so much because she shines brighter than an angel when she walks through the crowd.

Ntando Sgudla is currently a brand ambassador for Tammy Taylor Nails SA, Bobcut Hair Salon, and FeelGood & CO. She worked as a brand influencer for brands like Stronger Active Wear, Romero International Swimwear, the Box Fashion Teen Range, and Runway Sale. Ntando Sgudla said that her mother has been a great influence on her journey as a role model and a very supportive manager too. Ntando Sgudla faces a lot of challenges during her career, but she keeps on working so hard to gain more knowledge about the industry. Her hard work has paid off and within a short period, she has already worked with a lot of major brands.

Ntando Sgudla went to audition to succeed. She had discovered that the Miss Teen Universe SA was looking for candidates to represent South Africa. She saw posters about the audition on social media platforms. From there, the work began. She has done a lot of humanitarian works to support African communities. On March 20th, 2021, she won a modeling competition. She made it to the top 8, then to the top 3, then later pronounced as the winner. Her prizes include a trip to Dubai and so much more. She will be representing South Africa in Dubai where she will be competing with other winners from their respective countries.

Ntando Sgudla's responsibility is to continue to help communities around her and engaging issues that currently affect society. As a teen, her long-term goal is to go to university for BCom Law, entering Miss SA, then run as a candidate for Miss Universe. She wants to inspire and motivate a lot of people, including empowering young girls and teach them how to be self-sufficient in order for them to know their worth and potential.