CHOIR TO SING THE CODE OF LIFE 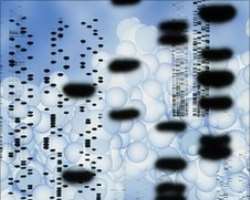 By Pallab Ghosh
Scientists and composers have produced a new choral work in which performers sing parts of their own genetic code.

Human DNA is made up of just four different chemical compounds, which gave musician Andrew Morley the idea of assigning a note to each of them.

The new piece, Allele, will be performed by the New London Chamber Choir at the Royal Society of Medicine on 13 July.

Each of the 40-strong choir has also had his or her own DNA decoded.

“I'd sung quite a lot with choirs in my youth and I've written stuff myself, and so I was aware that note sequences look a little bit like genetic sequences,” explained Dr Morley.

“It took a consultation with a proper composer to find out that was indeed the case, and that it would be possible to create something from genetic sequences.”

The “proper composer” approached by Dr Morley was Michael Zev Gordon, who was inspired by the idea.

“From the beginning I've seen the genetic code in two ways: as raw material that could be translated into notes, and also as a thing of wonder and a thing of extraordinary beauty; and it was from both points of view that the piece arose,” he told BBC News.

Members of the 40-strong choir are all participants in a scientific study.

Each of them has had his or her DNA decoded in order to see what it is genetically that distinguishes great singers from the rest of us.

That science is yet to be published; but in the meantime, almost as a spin off, Michael Zev Gordon has turned a simple idea into a beautiful work of art through his imaginative arrangement and use of rhythm.

To begin with, there is a single voice singing a simple rhythmic phrase; but as the piece develops, more voices join in – conveying the biological idea of replication and reproduction.

At its climax, each member of the choir is singing their own unique genetic code – resulting in everyone singing a subtly different song.

The conductor of the piece, James Weeks, says: “For me, it's an evocation of the extraordinary wonder that is the genome.”