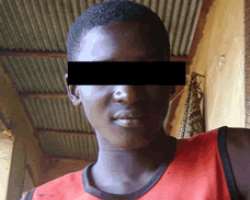 Two fathers: Product of the union
Marriage is a common cultural institution. In Nigeria, it comes in variants, according to the culture group. But it is not known of any ethnic group where it is allowed that a woman would marry two husbands at the same time.

But that pattern of marriage would not have happened until some 16 years ago when a set of twins in Kogi State introduced a strange dimension to marriage by taking one wife and having children from her.

While brothers and close friends kill each other over a woman and for encroaching on each other's territory, these strange ones scored a weird first in standing the culture of their people on the head. Because this was not acceptable in their world, their father fought the arrangement for as long as he lived. When his pestering became so unbearable, the first known woman to have married two husbands same time, same day and lived and had children for them had to dump the relationship.

Wags in the community have put their finger to the conviction that the strange twins eventually died after their peculiar marriage arrangement was forcefully severed. Yes, they accepted, to do their father's bidding, but could not contract any other marriage as separate individuals, as demanded by family, until they both died mysteriously.

A peculiar world
The villagers of Ayetoro-Gbede and Ayekunle-Gbede, Ijumu Local Government Area of Kogi State witnessed the unusual two young men, who were born about 40 years ago and died the same year four years back. They carried on like they had their private world oblivious of what the tenets of culture taxed them to do. That defiance made them step outside defined lines to take one wife and had children from her.

They were simply known as Taiwo (Towo) and Kehinde (Koido), the general accolade for twins in Yoruba. But they called each other Oba, short for their surname – Obadero. Like an oba (king) even as they called each other, they carried like institutions to themselves and died as mysteriously as they lived.

Saturday Sun had to find out the truth in the story in Kogi State that the two were more than enigmatic. They had everything in common and did everything together. They said the same words, when speaking and joined their buttocks when defecating.

What was responsible for this unusual act was explained by their stepmother and aunt, Awawu Obadero and Racheal Ologe. 'The reason for that unusual closeness and attachment was because they came with one placenta at birth and against our tradition of dividing it into two before burial, theirs was not divided. Thus, naturally, they began acting as an individual.'

Because the twins are late as well as their parents, the family home looked deserted when our reporter visited. But their stepmother, elder sister and son are the few inhabitants left. When asked to tell the story of the twins, the old woman, Awawu Obadero, excused herself and went to call the twins' elder sister from a nearby market. They came back and the story began.

Reliable tale
'The twins' mother had died when they were barely four years old', their sister started. 'Right from their infancy, they did things in common. They had left home to fend for themselves at about 10. Later, they settled in Ayetoro-Gbede doing bricklaying, farming and other odd jobs. It was there they met their wife, Toyin (not real name), who they shared, in defiance to everyone's objection. She bore two children for my brothers – Kulu, a female and Ibrahim, a male. Kulu is now married, while Ibrahim stays here in the family house. It was at the time our father insisted that they got married separately that strange and tragic things began happening to them.'

Wife of two
Saturday Sun spoke to the twins' wife, Toyin, who now lives in Ayetoro-Gbede. She pleaded that her picture should not be published because she has just moved on with another man after the double take.

She said: 'I knew Taiwo and Kehinde (her late twin husbands) since adolescence. We met when we were laying bricks in Ayetoro. They were both strange and adorable to me because they did and had everything in common. Both had approached me the same time. They used to say the same word at the same time. Strange even to me, I did not accept or reject their advances. I soon became inseparable from them anywhere they went. I must have been carried away by the way they did everything in common. They felt hunger, urge to urinate and others, the same time. They even expressed love the same manner and time. They were very interesting lovers. So I could not resist them. Even the villagers used to say that only I understood their weird ways.'

The strange wife of two husbands had fondness for the two and possibly would have loved them dearly and equally as they did her. 'I called one Iye-Oho, and the other Oba-Oho,' she revealed.

The special woman never held anything back about the affection she had for the duo. It would have been a sizzling double take for her as she revealed that her two late husbands had sexual urge the same time and expressed love, sex and romance the same way. You might be going too far to inquire if any of them was particularly better in bed than the other or if one of them gave her better deal.

Putting asunder
After giving birth to Ibrahim, the second child, father of the weird twins, Eleha Obadero, began putting pressure on them to marraige separate women, in line with customs and tradition. 'They did not like that because they had grown so attached to me. I did not also like the idea and so I withdrew from them. It was then they relocated to Ayegunle-Gbede, their hometown. But they never married another woman. Though I was told they tried several women, it never worked out. I had to join them later, hoping things would be better, but their father gave no chance for this re-union till they died in strange circumstances. Then I left with my daughter, Kulu and returned here,' the woman of history narrated.

One child, two dads
Fourteen-year old Ibrahim, the only son of the twins, also confirmed that his granddad at a time pestered his late fathers to get married separately and it was not long after this that tragedy struck. He said: 'It is true that my grandfather wanted my fathers to get married to different women. But it wasn't long after this that strange things began to happen to them. He used to also say that Taiwo was more likely my father, as I behaved more like him.'

But the handsome teen knows, without any doubt, that he has peculiar identity, as, perhaps, the only young man in his world who could be excused to fill a form stating double paternity instead of one, like others. And as a young child growing up, he would not have lacked paternal care, not with two fathers ever present with him.

Strange deaths
Four years ago, after the twins had accepted to toe the line of custom and accept to marry the prescribed way, they died.

Their stepmother, Awawu Obadero said: ' Kehinde was smitten by snake in his farm one day and unusual of him, he did not reveal it until late in the night when it was too late to remove the venom. He died shortly after. After his death, Taiwo immediately became a shadow of his former self and was always saying he would join his brother. In less than a year later, he fell ill and died.

Okilo, the village ballad, told Saturday Sun : 'If you asked one of them a question, the two will answer at once, saying the same word. They urinate on the same spot. They were very identical and so you cannot differentiate them. They had only one wife whom they were always going out with. They loved her so much. They reigned as strange twins in this village and died the same year.'