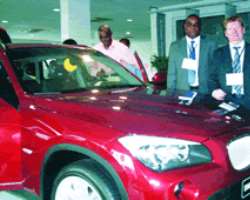 Adigun and Hughes at the unveiling of BMW XI
As far as the success story of the BMW X Series is concerned, the beat goes on… first was the birth of the X5 which sparked off an interesting competition with a compatriot, the Benz M-Class. X5's blaze of glory was followed by the slightly smaller and younger sister, the X3.

Then came revolutionary X6, which reflected the expertise of BMW designers in creating a vehicle that combines the attributes of a luxury sedan and a coupe.

The latest news from the Coscharis Motors stable is that the streak has just been extended with another Sport Activity Vehicle, and as a matter of fact, the very first SAV to hit the compact segment, in the global auto market. Called BMW X1, her arrival has prompted the expectation of new experiences among lovers of this German brand.

The new X1 was introduced at a media presentation in Lagos, as an elegant vehicle that not only conveys spontaneous driving pleasure, but also reflects the agility, versatile sportiness and state-of-the-art functionality of a typical BMW.

The vehicle is coming in with a string of awards, including a plaque at the 2010 Auto Bild Design Awards, 2010 Red-Dot Award for outstanding product design and a five-star crash test rating.

Hughes, who spoke on behalf of the Coscharis Group Managing Director, Mr. Josiah Samuel, gave more into one of the awards: 'The X1's outstanding safety standards also earned it the highest Euro New Car Assessment Programme (NCAP) is regarded as one of the most important and demanding tests required for new vehicles worldwide. The test scenario covers accident types, such as the head-on collision, side crash and side impact against a steel post'.

Accompanied by the Finance Controller, Godwin Umeaka; the General Manager, BMW, Sola Adigun; and Manager, Aftersales, Pius Onuh, Hughes unveiled the vehicle with a promise that it has what it takes to spread joy to every home that owns it, having met the requirements of a young-at-heart target group which does not want to compromise on agility or versatility.

Meanwhile, it is worthy of note that the iDrive system has been updated to access all telecommunication, audio and entertainment functions.

Also capable of spreading joy to owners and prompting new experiences is the award-wining BMW Efficient Dynamics which flaunts an intelligent package of benefits like considerable reduction in emission, improved. They ensure that BMW X1 sets new standards in terms of the efficiency and economy of its engine - thanks to its Brake Energy Regeneration, six-speed automatic transmission, Auto Start Stop Function (for manual transmission) and a host of intelligent technological modifications.

X1 owners will also find the six airbags protective enough, just as the adaptive headlights turn with the steering to illuminate the corner ahead as they negotiate it. Enhancing the aesthetic beauty are the body-coloured side-mirrors and special alloy wheels.