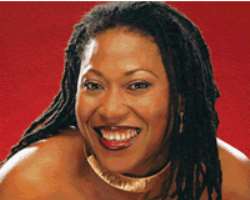 According to elated Mrs. Aluko, who's still basking in the euphoria of the overwhelming success recorded with the premiere, they chose the Vivian Ejike-led company, because of its giant strides in the marketing and distribution of Nollywood movies, since inception.

'We are giving the marketing/ distribution rights of Jungle Ride to Nollywood Distributions based on their antecedents and clear cut understanding of the techniques involved in the distribution of movies'. On why she decided to release the flick now, Mrs. Aluko said Jungle Ride is a contemporary movie that is laced with didactic lessons, for our leaders and the masses, 'especially now that 2011 is just by the corner.'

Shedding more light on Jungle Ride, which was directed by Kingsley Omoefe, Mrs. Aluko, a first and master's degree graduate of the University of Lagos, said her movie captures vividly, the increasing and alarming cases of unemployment among Nigerian youths.

'With the churning out of more and more graduates and just a few productive opportunities, much of Nigeria's teeming educated youths are becoming social scourge. The emerging result of so many educated graduates desperate on the streets is a gladiator's duel in the jungle. Unfortunately, many are stuck in a senseless search for employment.'

Among the galaxy of Nollywood stars that sparkled in Jungle Ride, include: Ngozi Nwosu, Bimbo Manuel, Omoni Oboli, Femi Brainard and Joseph Benjamin, Others are: Ashionye Ugboh, Emma Ayalogu, Chidi Ukwu, Seun Akindele and a host of others.

Written and screenplayed by Segun Michaels, Jungle Ride, Mrs. Aluko's fourth effort as a successful producer in Nollywood, was shot on various locations within the Lagos metropolis. She equally co-produced the big budget flick with Ajua Dickon, and said she's optimistic it would make a huge impact in the society, especially now that it's hitting shelves via DVD.

Meanwhile, Mrs. Aluko, is the current vice president of the Association of Movie Producers (AMP), and also a published author.