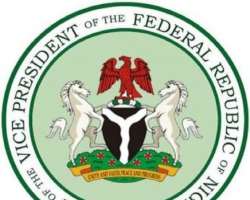 PHOTO: THE SEAL OF THE VICE PRESIDENT OF THE FEDERAL REPUBLIC OF NIGERIA.
Listen to article


As expectations grow and struggles for the 2011 general elections intensify, there are certain significant issues the electorate should consider so as to make the right choice that will bring about the real change we all deserve as Nigerians.

With the highest level of sincerity, honesty and commitment to the advancement of development in Nigeria, we must honour our women. Our political elite need to recognize the fact that behind any successful man, there is in most cases a woman.

Our women politicians have shown commitment to the growth of this nation, in their capacities as the custodians of ethics and culture which are both the basis upon which the grassroots grow. A critical survey of our homes reveals that a single man is hardly an organized entity. Whatever achievement a man attains can never be appreciated largely when there is no woman to spur. And this fact cannot stand barren in the face of our political situation and development backwardness.

To a conscious mind, it is impossible for a nation to develop without women. In some of our rural settings, women are absolutely in charge of the house though the men are regarded, according to the tradition, as the heads. I have heard the stories of so many Nigerian women who have practically proved that without them the society they live cannot progress. They have, individually or collectively, changed the fortunes of many of their people and brought development to their societies.

A woman has divinely been made a nation in the sense that they are really the societal developers. It is them who know the ingredients that give strength to the man. They hold the ace to development. But in Nigeria, they have not been properly utilized to achieve this laudable target that the nation has struggled to attain.

They are often regarded as not mature enough to handle presumed tough positions in the country. But events of recent years under a democratic setting have exposed our women politicians to be far above some of their male counterparts in terms of policy making, service delivery and human-face approach to matters that have direct impact on Nigerians.

Faces of patriotic citizens, surely including this writer glitter, their souls gladden and their hopes magnify at the mention of some of our women politicians. This is why our elite should consider the choice of one of our outstanding women for the position of the vice president in the 2011 general elections. Let every party try this. Let us try them and see wonders in our developmental efforts. Even though our first ladies have tried their best, they are not empowered to operate an office with constitutional backings. Whatever they have achieved in their individual efforts to affect the citizenry, it has always been limited to the blessings from their husband-presidents and has in most cases been circumvented by criticisms.

It is still fresh in our memories the heavy criticism that arose from the activities of the wife to late President Umaru Musa Yar’Adua. Hajiya Turai was seen as a usurper of power despite her efforts to affect a change in her capacity. Late Stella Obasanjo and late Maryam Babangida and Dr. Maryam Sani Abacha were examples of the limited powers a first lady in Nigeria can control.

However, it is important to consider the gains we can achieve by really involving the women and bringing them to limelight in our politics. In every aspect of life, there is a big name from the womenfolk. Is it in medicine, entrepreneurship, media, arts and culture? There are a good number of Nigerian women who have distinguished themselves in businesses either personally gained or jointly achieved with their husbands. They have achieved success through hard work, dedication and steadfastness.

Is there any difference between some of these hardworking Nigerian women and those women who have been supported to dramatize the potentials in womanhood in Serra Leon, Ghana, Germany and the United States? We often talk of development in other countries, but we fail to implement policies that will put us through. We have seen how the women of other countries have assisted development. What other qualities are needed for Prof. Dora Akunyili, Ngozi Okonjo-Iwuala, Sarah Jibril or Fatima Abdulsalami to be the vice president of Nigeria?

To be fair to ourselves, it seems the male politicians have had it hard to turn around the fortunes of this country. It is, however, not advisable to shun the struggle to grow. Our politicians must continue the struggle until we reach our desired target of development. Let us speak the language called Nigeria. Let us wear the beautiful attire called Nigeria with its lovely colours of green, white and green. Let us vanquish the north-south dichotomy and look at Nigeria as "Our Own Home".

Nigerian women understand the language of the country. They may now not really have the effrontery to wear the heavy shoes of the president in view of the fact that the polity is characterized by force, sycophancy, castigation and gangsterism. They can fit into the second citizen position and, gradually one day, we all will rejoice to have a woman president who will add more values to our lives. But before then, let our politicians soft-pedal in pushing harshly for their goals against constitutional purview.