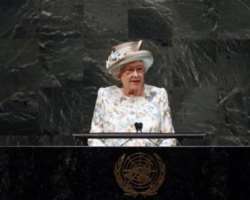 
Britain's Queen Elizabeth addressed the United Nations on Tuesday for the first time in more than half a century, an event coinciding with half-time of a World Cup soccer semi-final in South Africa.

The 84-year-old monarch took to the U.N. General Assembly podium during the 15-minute break in the match between Uruguay and the Netherlands, speaking of the U.N. challenge of combating global dangers while preserving human dignity.

Instead of competing for the attention of United Nations many soccer-loving diplomats, the queen's 10-minute speech to a special session of the General Assembly was finished before the teams returned to the pitch in Cape Town.

British officials said the timing simply fit with her schedule, but one official, who asked not to be named, said the World Cup match might have been a secondary consideration.

The queen, who is head of the Commonwealth of 54 nations and nearly 2 billion people, spoke to a virtually full house and received warm applause at the end despite an uncertain start when an apparently wry opening line -- "I believe I was last here in 1957" -- was met with silence.

In her speech, the monarch said the United Nations had adapted to change, and was now running 26 peacekeeping missions around the world, employing 120,000 people, compared with just three missions at the time of her previous speech.

New challenges included climate change and the struggle against terrorism, she said.

After leaving the United Nations, the monarch visited the World Trade Center site and opened a memorial garden for the British who died in the September 11, 2001, attacks.