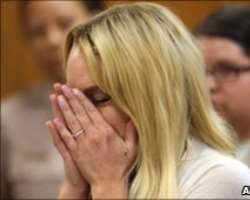 Lindsay Lohan breaks down in tears over jail sentence

US actress and model Lindsay Lohan has been sentenced to 90 days in prison for violating her probation in a 2007 drug case.

The judge ordered Lohan to surrender on 20 July to begin serving the jail term.

The actress had been on probation since August 2007 after pleading guilty to misdemeanour drug charges and no contest to three driving charges.

Judge Marsha Revel said Lohan would also be required to enter an in-patient rehabilitation programme after her release from prison.

Lohan, who starred in Mean Girls, burst into tears after hearing the verdict.

“I did do everything I was told to do and did the best I could to balance jobs and showing up,” she told the court.

She went to jail but spent only 84 minutes behind bars.

She was also ordered to complete a series of alcohol education courses. But she failed to do them on time and missed a number of meetings.

In May, an alcohol-monitoring bracelet was fitted after Lohan failed to attend a probation hearing because she claimed to be stranded in France.

Her lawyers said she was unable to fly back from the Cannes Film Festival after her passport was stolen.