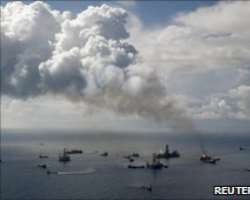 A leading Libyan oil executive has said he will recommend that the country's sovereign wealth fund buys a stake in troubled oil giant BP.

BP shares have roughly halved in value following the Gulf of Mexico oil disaster, which began in April.

“BP is interesting now, with the price lower by half and I still have trust in BP. I will recommend it to the Libyan Investment Authority,” Mr Ghanem said.

Rising costs
There has been a great deal of speculation in recent days about potential investors in BP, including the Kuwaiti Investment Authority, China's PetroChina and the US oil giant Exxon Mobil.

BP shares rose 3.4% in morning trading, having gained 3% on Monday after the reports of Middle East interest.

The firm has said that it welcomes new investors but has no plans to issue new shares.

The company is facing huge liabilities over the massive oil leak in the Gulf.

In its latest update, BP said the oil leak had now cost it $3.12bn (£2bn), though the total cost is forecast by analysts to be tens of billions of dollars.

Oil is continuing to leak into the Gulf of Mexico following the explosion on the Deepwater Horizon oil rig in April.

BP said two relief wells being drilled to stop the leak are on course for completion by August.