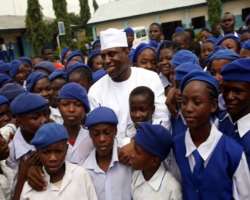 
ABUJA, July 05, (THEWILL) - Speaker of the House of Representatives, Hon. Dimeji Bankole Monday paid a visit to students of the City Royal Secondary school, Nyanya, in Abuja to apologize for the unfortunate development on the floor of the House on June 22, 2010, where lawmakers engaged in a free for all fight.

This is just as the students have appealed to the speaker to forgive the suspended members of the Progressives led by Hon. Dino Melaye.

Students of the City Royal College were present at the Gallery of the House chambers when members were exchanging blows following a motion to suspend 11 members of the ‘Progressives’ who had been calling for Bankole’s resignation from office.

Bankole who was received on arrival by the proprietress, Mrs. Priscilla Onwe apologized for the embarrassment caused the students and Nigerians at large. He said "I also want to use this opportunity to explain to you that there are laws in this country that are to be obeyed. All laws are to be obeyed, and I believe in your own school here, you also have your own rules whereby if you have complains, you go and report to your teachers.

"You never take the rules or the laws into your hands. When you do that, it leads to chaos, and then you would have to follow the rules irrelevant of what you feel at that time.

"On this particular day I believe a few of our colleagues flouted the rules of the House, and actions were taken based on the rules of the House. I would advise all of us here, especially the students that you should obey the rules of your school. Because if you do not, and you get into the larger society, you are likely to disobey the laws of the society, and once that happens, you will get punished for it.

"Once again I apologize to all of you, and invite you once again to come and witness the proceedings of the House.

Fielding questions from journalists on whether the House would tow the line of the students’ request Bankole however said that as leaders, they would want to see an amicable resolution to the crisis.

"It is (the request) a wonderful idea and we would consider it. We are adults and we have responsibilities of managing ourselves as leaders, and I can assure you that that we would come to amicable resolution."

But the students in their separate appeals to the Speaker appealed to Bankole to temper justice with mercy. Head boy of the institution, Master Kinsley Ogwo, the head girl, Miss Rosaline Odo and the school’s moral prefect, Master David Sunday said while they pray for absolute peace to reign in the House, "all those that have been suspended should be forgiven."

Miss Rosaline Odo explained that they were pained while experiencing the fisticuff, but were however informed when they returned back to school that such disagreements do happen elsewhere, as people are bound to quarrel and fight over important issues.

The Progressives had accused the leadership of the House under Bankole of corruptly mismanaging over nine billion Naira of the House’s 11 billion Naira capital vote received between 2008 and 2009, insisting that Speaker Dimeji Bankole must therefore resign.

However, when the House resumed plenary from its end of legislative year recess, 11 members of the progressive were given indefinite suspension amidst protests that saw members engaging in a free for all, even when the students and other visitors were seated in the gallery.