BANKS' CRISIS: MERGERS AND ACQUISITIONS TO BE CONCLUDED ,IN ,Q3 â€“CBN 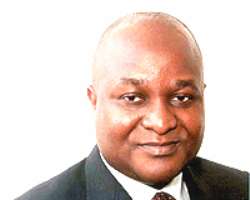 Deputy Governor, Operations, CBN, Mr. Tunde Lemo
The Central Bank of Nigeria and financial experts agree that the planned commencement of operations of the Asset Management Corporation of Nigeria to coincide with the conclusion of mergers and acquisitions will make the nation's banks bounce back, YEMI KOLAPO reports.

Mergers and acquisitions in the Nigerian banking sector will be concluded in the third quarter of 2010, the Central Bank of Nigeria has said.

The Deputy Governor, Operations, CBN, Mr. Tunde Lemo, told our correspondent on Sunday that the actions that had been taken so far in the sector were to ensure that all the risks in the banks were taken care of.

He dismissed fears that foreign interests were backing out of deals as a result of the health of the banks, saying that mergers and acquisitions, all over the world, were not activities that could be concluded with the snap of a finger.

He noted that foreign investors were businessmen that would assess the banks based on other criteria and not the health alone.

Lemo, however, said he was not bothered whether foreign investors backed out or not, adding that there were currently many local interests in the banks. But he did not mention particular interests.

According to the deputy governor, when the Asset Management Corporation of Nigeria begins operations, 'it will make the banks look good' because it will buy the toxic assets.

He said, 'When this is done, a lot of capital will be released into the banks and they will look better. Remember, these toxic assets had been written off the books of the banks, so once they are bought by AMCON, there will be some capital.

'AMCON is not just a restructuring mechanism; it is also a recapitalisation mechanism. We have made significant progress in the resolution of the problems and mergers and acquisitions will be concluded before the end of the third quarter.'

On the banks' return to profit, Lemo said, 'When you have made full provision for all bad debts and the CBN has solved liquidity problem, you have shed excess fat and you now have good and honest management, all that is left is a return to profit.'

However, the Managing Director, Financial Derivatives Company Limited, Mr. Bismarck Rewane, said in a telephone interview with our correspondent that to have a deal on the rescued banks, 'the vendor will have to make serious concessions to potential buyers' because of their negative networth.

'To find a common ground may be difficult. The vendor will assign a value, which is higher; the buyer will assign a significantly lower value. How to bridge the gap will be the problem. But there is no bid right now. As to the profitability of banks; yes, they can make profit. But the profits announced are for the first quarter.'

Rewane, however, added that once the AMCON bill was signed into law and operations began, it would be much easier for transactions to be concluded as regards recapitalisation.

'It is the AMCON bill that has not been signed into law that is holding things back. Once it is signed, it will be much easier to recapitalise the banks,' he noted.

Meanwhile, a top official of one of the highflying banks that passed the CBN's first round of audit told our correspondent on Sunday that he did not foresee any problem with the rescued banks' recapitalisation, based on the brands that they had.

'There is no way investors will not want to buy the banks with the kind of goodwill that they have. It is all about making some adjustments in terms of management of the system and getting things done in the proper way,' the executive director, who asked not to be named, said.

He said any investor would know that the banks on ground as at now, could not cover the available market in the country, noting that buying into the banks would make good investment at the end of the day, so long as the necessary changes were made.

He said, 'Nigeria is well under-banked. It was the managements that killed the banks. So, all an investor needs to do is to tinker with the management and recapitalise. We have not even covered the available market in Nigeria.

'The banks are already recording profit. So, if that trend continues, and they increase the tempo, which is likely to be the case, they will definitely recover their money and be in profit in cumulative terms. There will be no cause for manipulation of information now.'

On the recent pronouncement by a rating agency, Standard and Poor's, that Nigerian banks were still highly risky, he said, 'Did the same S&P not give pass mark to all the banks before Prof. Chukuma Soludo left? That is their opinion as far as I am concerned because they are not in the market.'

S&P had said, 'The Nigerian banking system is still highly risky. The ratings we have for the banks are in the single 'B' category. It's a very very low level compared to most banks in the world.'

It added, however, that the bail-out by the CBN had been a 'very, very brave move,' which had prevented a catastrophe.

Investigation by our correspondent revealed that Afribank Plc had so far recovered about N68bn since the CBN-appointed management took over its affairs, while Oceanic Bank International Plc had done over N100bn in recoveries.