DA BLING HOOKS A SOUTH AFRICAN WHO WORKS WITH MTN 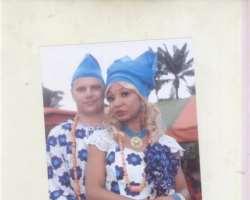 The beautiful lady recently tied the knot with her heartthrob, Marek Stanislav Czerepowicz who works for the nation's giant telecommunication outfit, MTN. The traditional wedding which had a few of Da Blink's friends in attendance was held at Ugwuike Street, Iwollo, Eziagu, Local Government of Enugu State, home of the newest bride in town.

The London returnee musical talent, Da Blink, who we learnt has just finished shooting one of the hottest tracks in her forth-coming album has changed her status from single to married shutting up the mouths of her enemies. Da Blink is not a new face in the entertainment industry.

She started as an actress years back then as Lynda Raphael before she jetted out of the country. Her return back home, Lynda switched from movie to music and was tagged 'Da Blink'. Today, the name is a trademark and has glued to her like a plaque.

The wedding which held amidst pomp and circumstance penultimate Saturday 12th of June, 2010 was said to have received the blessing of her parents and the South African hubby who was said to have filled with joy for the new development in his life too was not left behind in the show as he was all over his wife like two youngsters in love.
Meanwhile, Da Blink who has rebranded her musical career is already making preparation for their white wedding which comes up before the end of this year in Lagos.