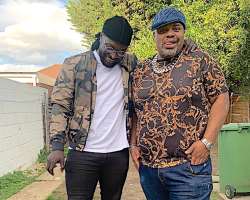 Uk based Ghanaian Afro dancehall artist Danny Lampo was spotted on set shooting a new movie titled Forced which features most of the big stars such as legendary Ghanaian actor Ekow Smith Asante, Abigiel Boateng and Erskine who also doubles as a director and a producer.

The movie forced is set to me premiered soon, Danny is one if the most hard working young guys who for the past few been doing the most in the music industry.

Danny is currently out with a refix of Mr Drew’s ‘Eat’ song which featured Stonebwoy.