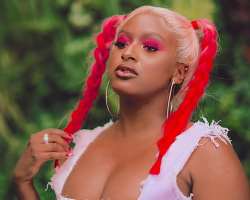 Stepping out of her comfort zone and into dancehall territories, ‘Karma’ sees Cuppy effortlessly take to the bashment beat, swapping verses with Stonebwoy, who brings his signature flare to the track. A match made in heaven, the single leaves a lasting impression and has listeners singing “Karma” whatever the weather.

Discussing the collaboration, “Karma” is a song that really brings out a different side of me” Cuppy enthuses. “It’s a song that allows me to express myself in a sensual, confident and playful way. This record is so special because it was made during an unplanned trip to Accra, sometimes you just have to go with the flow!”

Fans of the Afrobeats princess who have been eager to get more visuals from Original Copy can now rest assured, as it seems we'll be getting a music video for Karma sooner rather than later!

Here are some exclusive photos of the two African superstars looking dapper;