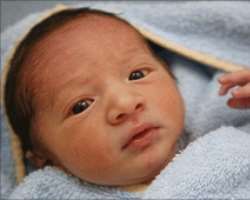 By Clare Murphy
Women who plan home births recover more rapidly from childbirth, but there is a higher risk of their child dying, an international study suggests.

US analysis of more than 500,000 births in North America and Europe found death rates for babies in planned home births were double that of those in planned hospital births.

But the risk was still low, at 0.2%.
UK doctors said the evidence needed to be taken into account, but a midwives' body questioned its relevance.

The research, published in the American Journal of Obstetrics and Gynaecology, examined studies on the relative safety of planned home and hospital births from around the world.

Crucially, it looked at where the woman had planned to give birth, rather than the actual birthplace.

The researchers argued that the safety of home births may have previously been overplayed by the fact that when there are complications and a woman is rushed to hospital, any adverse outcome is recorded as a hospital birth.

Rates of home birth vary across the developed world. In the Netherlands a third of women deliver at home, while in the US around one in 200 women do so.

Fewer interventions
The researchers described their findings of a doubling of the risk of neonatal mortality among those planning home birth as “striking”, because it is often those with the lowest risk of complications who do not need to deliver in hospital. When researchers took out babies with congenital abnormalities, the risk was threefold.

When deaths occured among the home birth group, they were overwhelmingly attributed to respiratory problems during birth and failed attempts at rescusitation.

Overall these problems have been decreasing in recent decades, which is thought to be down to greater medical intervention, including more liberal use of ultrasound, electronic fetal heart monitoring, the induction of labour and Caesarean delivery.

But the lack of medical intervention may explain why the mothers who planned a home birth tended to end up with fewer tears or lacerations, fewer cases of postpartum haemorrhage and fewer infections.

But the researchers suggested these benefits did come at a cost.

“Women choosing home birth, particularly low-risk individuals who had given birth previously, are in large part successful in achieving their goal of delivering with less morbidity and medical intervention than experienced during hospital-based childbirth,” said lead author Dr Joseph Wax from the Department of Obstetrics and Gynaecology at Maine Medical Center.

“Of significant concern, these apparent benefits are associated with a doubling of the neonatal mortality rate overall and a near tripling among infants born without congenital defects.”

Robust selection
In the UK, the Royal College of Obstetricians and Gynaecologists said the fact that planned home births resulted in fewer interventions for the mother was something which specialists were already aware of.

“The finding that the consequences for the baby are more severe needs to be carefully considered by women, policy makers and care providers,” said its president, Professor Sir Sabaratnam Arulkumaran.

“Certainly, the move towards offering women a choice in their place of birth in the UK needs to be weighed against such evidence.”

But, he added, with a robust selection system which ensured high-risk pregnancies were excluded from homebirths and by making sure all midwives providing the services had good rescuscitation skills, risks to the baby could be reduced.

“With the above systems in place and provided women receive one-to-one midwifery care, planned home births for low-risk women are a viable option,” said Prof Arulkumaran.

“However, birth can be unpredictable and these women should also have quick access to obstetric care if and when an emergency occurs.”

Mervi Jokinen of the Royal College of Midwives, said the study was interesing, but questioned the validity of its findings for the UK.

“Comparison of the results is difficult because the study's authors are working with data collected differently in many countries.

“Here we have services delivered by midwives who are skilled and experienced at home births and resuscitating newborns.

“This is perhaps in contrast to many of the other countries this research covers.”

A study is currently being carried out to establish the relative risks of home and hospital births in the UK.

The rates are low, with just under 3% of deliveries taking place at home, according to the most recent figures from the Office of National Statistics for England and Wales.

Mary Newburn of the National Childbirth Trust said the American study was an important one “that needs reviewing”.

“NCT's own detailed review of home birth concluded that, although the quality of comparative evidence on safety of home birth is poor, there is no evidence that for women with a low risk of complications the likelihood of a baby dying during or shortly after labour is any higher if they plan for a home birth compared with planning a hospital birth.”

A Department of Health spokesperson said:
“It is important for all women to be able to give birth in a safe, high quality environment that is best suited for them.

“In England, midwives discuss the various birth options available for mothers and any associated risks to help them make an informed choice.

“We have commissioned research that is comparing births planned at home, in birthing centres and in hospital. This report is expected to be published next year and we will look at the findings carefully.”