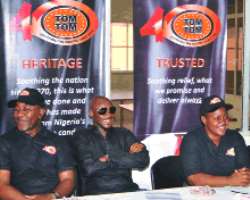 Tom Tom, Cadbury Nigeria's foremost candy is 40 years old this year and the company's management has announced that the Ruby anniversary will be celebrated in an exciting way.

The company has concluded arrangements to flag off a musical event tagged Tom Tom Stripes Groove to mark the products birthday. According to Paul Udochi, the Sales Controller of the company, the Tom Tom 40th anniversary Stripes Groove is going to be an exciting experience for consumers.

He said the biggest artistes have already signed up for the show. They include: TuFace, D Banj, Banky W, Timaya and Austino Milado with Koffi as the MC.

He thanked the consumers of Tom Tom for their consistent patronage and supports these 40years and assured them that the Stripes Groove will be a festival to remember.

The brand has in the past undertaken social responsibilities that essentially promote safety in our fast developing environment that is fraught with risks. Some of these projects include the zebra crossing signs on major cities to aid the public in crossing the busy roads and the use of seat belts. Tom Tom also supports Super Eagles with the Shoot on Target reward.