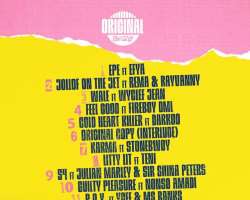 The Nigerian superstar teased fans with her album last month when she dropped the lead single “Jollof on the Jet” featuring Rema and Rayvanny. The single has amassed over 2 million streams and multiple positive reviews from fans and critics.

The 12 track album features 14 artists from around the globe including Grammy award winning wyclef Jean, Ghanaian superstar Stonebwoy and London based musician Darkoo.

Cuppy is set to solidify her spot as the princess of Afrobeats with the release of Original Copy.