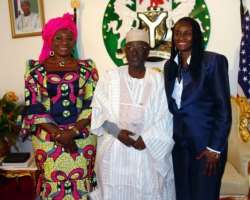 JOS, June 25, (THEWILL) - While most states in the federation have started witnessing a flurry of activities preparatory to the 2011 elections, the situation in Plateau is a bit different.
With less then a year to the official commencement of a new administration, the political atmosphere in Plateau state is dull.

The lull in political activities is to the extent that less than seven months to the anticipated day of election, it is not clear who and who will be contesting the governorship election in the state apart from the state governor; Jonah Jang who has publicly declared his intention to seek a second term about three years ago.

The intention of the other aspirants has remained largely a conjecture as most of them have not come out to say they are interested. Some posters of a few of them have appeared on the streets, but with the aspirant themselves shying away from publicly being identified with the interest, it becomes difficult, for such aspirations to be taken seriously.

Those who are said to be interested in wrestling the job from Jang come 2011 include his deputy, Pauline Tallen, former governor of the state, Fidelis Tapgun, former director in the federal capital development authority, Engr. Jimmy cheto, former permanent secretary in the federal ministry of works, John Alkali, former minister of sports, Damishi Sango, former Jos North local government chairman, Danladi Atu, former special adviser to the state governor, Chris Giwa and few others. But of this tribe, none has publicly declared. Their hesitation is said to be due to the uncertainly in the political atmosphere in the state.

Since March 2009, when a group of PDP members led by Chief Emmanuel Mangni, accused the state governor of pocketing the entire party structure in the state and broke away from the PDP structure supported by the governor led by Prof. Dakum Shown, things have not remained the same.

The political situation in the state has continued to resemble the general uncertainty in the state occasioned by the frequent crises which has remained hazy and largely apprehensive.

There have efforts to restore normalcy within the party even from outside but this has not yielded fruits.

The national secretariat of the PDP under the leadership of Chief Vincent Ogbulafor had tried to intervene by mandating former governor of the state, Chief Solomon Lar to reconcile the two factions but achieved no success.

Frustrated, Chief Lar was left with no option other than to submit a report to the national secretariat of the party which dissolved the two factions and set up a caretaker committee to oversee the affairs of the party for three months and there after conduct a free and fair congresses that would reflect the wishes of the party-men and women in the state.

Chief Abu King Shuluwa was appointed chairman of the committee.

The Shown faction then took the matter to court and after several months secured a favourable judgment as the court declared the setting up of the caretaker committee as illegal.

With this development there is serious uncertainty in the state chapter of the party and that if the national secretariat of the party fails to intervene into the matter, the party might risk losing the state to another political party in the forth coming general election.

Even as the Independent National Electoral Commission (INEC) is contemplating conducting the 2011 the general elections in January next year, in Plateau State the Governorship, Senate, House of Representative and state House of Assembly are in a state of dilemma as both the Shown’s faction and the caretaker committee are both laying claim to the leadership of the party in the state therefore the aspirants are confused as to whether they should identify with caretaker or the Shown group.

Up to this moment campaigns have not yet commenced in the state due to the uncertainty in the party and as a matter of fact some of them are contemplating dumping the PDP for another party to pursue their political ambitions.

Worse still, due to the security situation in the state, the state government has disapproved of gatherings. This has made it difficult for politicians to campaign freely.

While other aspirants seem to be observing things and keeping a low profile, Jang has secretly stepped up his campaign using the machinery of government. He has appointed a campaign director and work is on to put the final dots on the budget for his campaign.

THEWILL learnt however that the other candidates, realising the power of incumbency, are contemplating coming together to present a common front so as to defeat Jang in the next elections.

This is said to be partly responsible for why some of them have not thrown themselves wholesale into the race as negotiations are still going on.

With the proposed plan to jettison the principle of zoning at the national level, the plan is to convince the aspirants form the other zones to support a particular candidate from the southern zone who going by all the indices is the one that currently has the capacity to fight the state governor effectively.

This it is said is what has added to the seeming lack of interest among the aspirants but which is expected to fizzle out soon, when a decision has been reached amongst them.