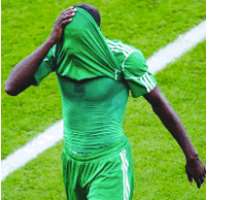 The results of the matches played so far in the ongoing FIFA World Cup, the first of its kind to hold in African soil, have shown that African teams are not yet prepared to win the highest soccer laurel in the world. Their lackluster performances have negated the Brazilian football legend, Pele's prediction that an African team will win the World Cup by 2010.

The legend's prophetic utterance would have been fulfilled if African teams had risen to the challenge. So far, there is no sign that the cup will come to Africa. The nearest we got to that prediction is South Africa's hosting of the game.

The rainbow country has done Africa proud in the manner of playing host to the world. It has demonstrated that Africa has come of age. Even if other African teams to the global football fiesta did not do well, what happened to our own Super Eagles? What went wrong with the team equipped with 'world class' coach? What of the boast that the team would reach the quarter-final stage in the tournament? These are some of the questions those in charge of the nation's football administration would should kindly answer.

But before they should do that, let me divulge my own reading of the bad situation the Eagles has put us. The team's performance so far is the worst in the history of our participation in the World Cup. There is no doubt that the Eagles went to the game as the underdog. They did not go there as a champion. Their ill-preparation has demonstrated that they were there as mere spectators. It is therefore factual that the Super Eagles that went to Mandela's country is not a team. It lacks all the attributes of a team. It has no cohesion and the needed blending. It has no rhythm and energy. It is colourless and bereft of fighting spirit needed at a competition of this magnitude.

Eagles' un-preparedness started manifesting during the qualifying stages, which they managed to scale through amid tension and despair. The Eagles' lackluster performance is the price we will pay for our usual fire brigade approach to issues. We are a nation of miracle workers and seers. We believe that everything under the sun is achievable with prayers. Hence we pray a lot these days. We pray for success for virtually everything including visa interviews, examination, jobs, business, and what have you.

They went to South Africa well armed with belief in the efficacy of miracles. They prayed so hard but the teams that worked hard are the winners. The present Super Eagles is a far cry of the former Eagles that we all know. The team that went to the current World Cup cannot pass the test of being named the Eagles. Our own Eagles could neither run nor fly. They are docile, dull and uninspiring. They lack initiative. Their morale is so low that any team can wallop them with ease as the underrated Greeks did.

The greatest undoing of the team is the ad-hoc nature of our preparation to the event. There was no time the team practised together. There were no friendilies. And to worsen the entire situation, our football managers at the Nigerian Football Federation (NFF), the spoilers of our game, decided to employ Lars Largerback. The irony of Largerback's engagement is that Nigeria rejected her own successful coach, Shuaibu Amodu, who qualified Eagles for the mundial and hired a foreign coach that could not qualify his country for the same game. What does this say of our country? A lot.

That was the beginning of our failure. Why take a white failure in place of a black success? Is there any national pride in that decision? Now that Largerback could not take us to the quarter-final, what next? He should be fired. What of the quantum money squandered on his head? NFF officials involved should cough out the money.

The Eagles' poor showing in the game was not surprising. It is truth foretold. Most Nigerians never expected any miracle from an unwilling and unprepared team. Not even prayers could save the Eagles. The lesson of Eagles failure is that success is a product of hard work and not wishful thinking or fantasy. There is, indeed, no shortcut to success.

Lamentations would not help us in this matter. Rather, we should go back to the drawing board and start planning and preparing for the next World Cup. From the ashes of the current Eagles, let us build a new formidable team. We have enough talented young players that will be our next Super Eagles. Nigeria has enough football talents that can give us four teams at a go. The problem, most times, lies in the selection of the team. Over time, our team selection is not based on merit. Ethnic considerations mar our team selection. The ineptitude of the national politics has permeated the soccer arena with terrible consequences. And we are paying heavily for such laxity.

Football is not a sport where we can show our ethnic constituents. It is a competitive sport where merit should be the watchword. To wear the national shirt is not an issue that should be politicized. Nobody should bribe his way into the team and nobody should be imposed on the team based on ethnic standing.

Our coaches deserved to be exposed through continuous training just as our players too. Relying on foreign coaches is never the answer to our coaching problem.

Also, relying on only foreign based players and neglecting our local ones is bad. Our football is in disarray because of the long neglect of the local league. It is time to revive the local league and make it attractive. In the past, Nigerians would identify either with Rangers of Enugu or the Shooting Stars of Ibadan and others. Today, it is Arsenal, Chelsea, Man U or whatever. All of them are foreign teams. Now, we know and discuss foreign football more than our own.

Unless the situation is changed, we would continue to perform poorly in regional, continental and international soccer competitions. Let the government privatize our football. Football is a serious business that should be left to the private sector. Football is a big industry that can generate lots of jobs. Football is better managed if left in private hands. The present NFF should be disbanded forthwith. Those there have ruined our football. The Super Eagles failure has shown glaringly that doing the same thing every time with the same method can only lead to failure. This is time for paradigm shift in our football administration.

Toast to Egwu @ 56
The immediate past Minister of Education and former Governor of Ebonyi State, Dr. Sam Ominyi Egwu, turned 56 last Sunday. In this clime where life expectancy has fallen so low from what it used to be at independence and a little after, the milestone is a great achievement worthy of celebration.

The soft-spoken and unassuming politician has in his 56 years on earth exhibited modesty in both private and public life. He has equally contributed immensely to the development of the nation. I join his numerous admirers in wishing him many happy returns and many more years of fruitful engagement in this mortal plane. And may the good Lord that has guided his life so far continue to bless him and enable him contribute more to the improvement of humanity.