As a teenager I was described as a peacock – Racheal Oniga 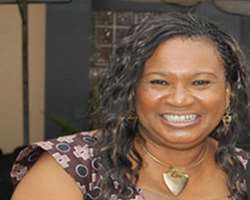 Fair complexioned Rachael Oniga is a household name in the Nigerian movie industry. She is one of the cross breed artistes in the industry having featured in many English and Yoruba movies. Beyond

this, this mother of three is a model and has featured in different television commercials. She spoke with FUNMI SALOME JOHNSON on her career and her eighteen years of single-parenthood among other things. Excerpts:

You seem to be a very private person. Why is that so?

I am a very private and homely person. That is not to say that I do not enjoy parties, but I select the type of parties and events I go to.

What then determines your choice of events?

It depends on the organisers, the type of people that will be there and may be if I happen to be chanced and it is a day I just want to make merry and enjoy.

What are the things you look out for in any movie that will make you take part in it?

The story is one of the things I look out for. Even if the script is poor, if the story is a good one that can be worked upon, I will accept it. I also look at the director of the film. If that director is one that I know and respect because he is good at the job, I will accept it because I know that once the director is good, he will do a proper casting without being sentimental about it. I do not like to find myself in a situation where either the director, the producer or the crew is sentimental and they tend to want to put somebody in the play or in a particular role because they have a relationship with him or her.

What motivated you into acting? Was it a childhood dream?

As a child, I thought I would end up a singer or dancer because I love to dance and sing a lot. I have always had a flair for showbiz and entertainment generally.

So, why did you not go into music or did you consider it as not being a lucrative one?

Not really. It is just that the opportunity did not just present itself. When acting came in, I opted for it. As a person, even as a child, I had a mind of my own even though my parents were very strict. But you know a door has to open for you to go into something. Even if you are destined to be into something, the door has to open first. The door for acting came and I entered it.

So, when did the door open for the acting career?

Which was your very first job?

My first job was on television. I featured in a programme called Memorial Hospital. I was an inmate there. After TV, I went into movies and my first movie was Onome and my debut Yoruba movie was Owo Blow although a lot of people think it is Boorepo. I actually did Owo Blow and one or two Yoruba jobs before Boorepo but it just happened that Boorepo came out and everybody just fell in love with the character that I played in the movie. And again, seeing an English speaking actress feature in Yoruba movie, they just fell in love with it.

Having had a taste of both the Yoruba and the English-speaking Nigeria movies, how would you rate their performances?

I was opportuned to work with one of the good directors. The man is from Benin but the story he did featured around another tribe where he is not from and for me, I think that is a Nigerian English movie. I don't want to mention the name of the director so that it would not look like I am blowing his trumpet. You know in those days, you don't think of whether you are Ibo or Yoruba, we all worked together as one and we were getting good stories and we had a lot of good script writers. I don't know what has happened to those good old script writers.

When I see a job from one of those old script writers I will know and when I see the present day writers, I will also know. It is not as if I am criticising but the point is that I just think we need to go back ti the basics because scripting is very important; our stories are equally very important. Our stories do not portray our African culture any more. In those days, you will see the African culture, you will see the cultural aspect in our movies. You will see the village life and you will see the flamboyant city life. You will see the Igwe, Obi if the story revolves around the Ibo kindred. By merely watching the movie, you will know so much about Nigeria. Back then, the emphasis was not all about carrying guns like it is today. Fine, that is the trend but we are not Americans; they are selling their own culture which I think that is what we should be doing too. When we used to sell our culture through movies, a lot of people outside Nigeria appreciate us a lot. You travel outside Nigerian shore and you find lots of people coming to you to appreciate you even in France but now, the story is not the same again.

But why is it so?

I don't know but definitely something is wrong. And that is not to say that we don't still have good films. Once in a while we see the old hands coming up with one good story lines and very beautiful technical hands. Technically, we are okay but we need to improve on our story lines and our scripting. If somebody comes up with a love story and it sells, that does not mean that every producer must do love story. In those days, it was not done like that. You come up with your own story and another person comes up with his own story. Stories were very important then and when it is time for awards, you see the excitement and all that; everything is so beautiful and so real.

How do you combine your job as an actress with managing the home front?

Well, one would just give glory to God because it is a calling. One would just have to find a way of adjusting. After all, the bankers work, they have families, they have children. Medical doctors, accountants, they all work and still have their families. Why should our own profession be different? So, we just find a way around it like others find ways around their jobs and homes too.

Is there anyone of your children taking interest in your profession?

Unfortunately none of them is taking after me in terms of profession.

I don't know, may be they are not destined to be.

Being a widow, how have you been coping with loneliness and the pain of single parenthood over the years?

I am recently widowed but for so many years I have been separated from the man. So I do not see myself as a widow but as a single parent of almost eighteen years. And the fact that one is a single parent is no excuse for not being hardworking. Agreed there are lonely periods when the kids are grown and have gone their separate ways but as a married couple such times come in their lives when the children are grown and are away from home. After graduating, they start working, get married and leave the house. And the home will be left for you and your husband if you are together. But for me I have been like this for close to eighteen years.

Do you have any intention of remarrying?

No one is God but I've been like this for eighteen years? What I just have to say is that no one is God, God is mighty and there is nothing impossible for him to do. You might say in your heart that I am not going to do this and if God says that is what is going to happen, it will happen. That is because you have no power over your life.

You are a beautiful woman and one would expect some men to be hovering around you. How do you handle advances?

I just appreciate them and thank them.

And the stubborn ones?

You will have your own way of putting them off. May be probably as a child while growing up I never saw myself as beautiful because I was a tom boy. I saw myself more like a boy than a girl. May be when it was time for me to get married was when I started thinking about it. To me everybody is beautiful because everything God created is beautiful. But now when people say when you were younger, you must be stunning, fine, yes, because I remember that when I was a teenager, they used to call me okin (peacock) and then I wondered why they called me that. They would ask me if I knew the meaning of that and I would just wonder.

What kind of a child were you, were you the stubborn type or the quiet mummy's pet?

Oh dear, I pity my mother! I was very stubborn! I told you that I was a tom boy, I was something else. I climbed trees and I fought a lot. I was a fighter and I didn't fight with girls because I saw them as lower specie; I fought with boys a lot. When I look back I just wonder what kind of a child I was.

What was usually the cause of your constant fights?

What advice do you have for younger women out there who are anticipating to be like you in life?