I Advice Ladies To Own "Vibrators" - Toke Makinwa 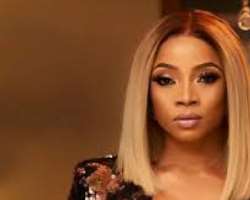 Makinwa stated this in her Vlog video for on YouTube.

The video was released late on Wednesday.
It was then brought to Twitter in the early hours of Wednesday by some of her followers.

She advised ladies to own three types of vibrators.

Makinwa summed up in the video: “It is okay to know your body.”

This has set Twitter ablaze, becoming one of the trending topics on Thursday.