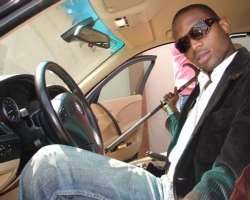 But for some passersby and travelers alike who waded into the matter and settled it amicably, the sensational artiste, D'Banj associate partner, Mo'Hits Entertainment Company, would have been seriously battered over an unknown issue that ensured between him and a guy directly opposite Qatar Airline Stand last Thursday.

D'Banj we were informed by a reliable source that was at the airport to take a flight to London on Thursday morning only for a hot argument to have allegedly ensured between him and a guy who was raising his voice so high over an unknown issue he had with D'Banj.

Sensing the implication of what that scenario might cause his person as a public figure and of course, a Glo Brand Ambassador, Mr. Endowed as he's now being referred, we gathered, simply walked away and left the guy acting in his foolishness. What could have brought D'Banj and the guy together to warrant such insults passed still remain a mystery but www.nollywoodgists.com is digging further into the case to get full details.