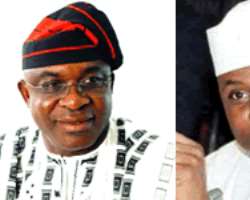 Mark and Bankole
Fresh supremacy crisis between the Senate and House of Representatives over the review of the 1999 Constitution is in the offing as the President of the Senate, David Mark, on Thursday declared the statement credited to the Speaker, Dimeji Bankole over the version of the amended Constitution sent to the state Assemblies as mischievous and unacceptable.

Accordingly, Bankole directed the Clerk to the National Assembly (CNA), Alhaji Salisu Abubakar Maikasuwa, to immediately withdraw the copies sent to the state Assemblies by Senator Mark, who is the Chairman of the National Assembly and replace them with the 'genuine' harmonized version. Reacting to the saga on Thursday, Senator Mark said there was absolutely no need for anyone to run to the media demanding and directing the CNA to withdraw what was sent to the state assemblies.

Senator Mark further said the development marked the height of mischief, stressing that anyone going about directing another to withdraw any document was certainly wrong as nothing would be withdrawn.

The Senate President explained that to avoid any confusion, the National Assembly transmitted three documents that included the Senate, House and the harmonized versions of the Constitution to the Houses of Assembly, saying: 'It is wrong to go to the media to say that the version transmitted to the states is the Senate version.'

He berated the approach of the leadership of the House of Representatives over the matter, adding that a better and more mature way would have been to go through the Deputy President of the Senate, Ike Ekweremadu who, he noted, was the chairman of the Constitution amendment process in the National Assembly. Deputy Senate President Ekweremadu, had under Order 43 of the Senate Standing Rules, denied claim by the leadership of the House of Representatives that the Senate sent a doctored version of the amended Constitution to the state Assemblies.

Senator Ekweremadu said at the Senate sitting: 'I want to assure my colleagues and Nigerians that what was sent to the Houses of Assembly was essentially the harmonized version of the amended Constitution. If there is any confusion at any point, I believe it must be deliberate and meant to frustrate the exercise.'

The Deputy Senate President noted that the issue emanated from the Lagos State House of Assembly, adding that he believed the problem must have emanated from either the state Assembly Clerk or from the printers.

Senator Ekweremadu congratulated the Kogi House of Assembly for being the first state legislature to pass the harmonized version of the reviewed 1999 Constitution.

In his reaction, Senate spokesman, Senator Ayogu Eze, said the claim by the leadership of the House was anything, but true. 'This cannot be true because the three documents the secretariat was asked to transmit to the various state Houses of Assembly are as follows- (1.) A copy of the harmonized version; (2) A table showing the two versions passed by the Senate and House of Representatives respectively, and (3) A copy of the report of the conference (harmonization) Committee of both chambers. We are therefore, at a loss where the mix-up, if any, would have arisen from,' Senator Eze said.