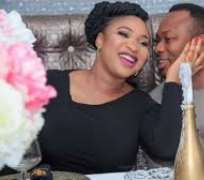 Nollywood actress Tonto Dike has described her ex husband as a goat who got his fame because of her.

It will be recalled that Tonto Dike levelled some serious allegations on her ex husband accusing him of being a bisexual. She added that she left her marriage because her ex husband was sleeping with another man. However, Churchill Olakunle has come out to dispell claims. Tonto Dike has also replied back her husband who also threw shades at his ex wite. According to Tonto, his ex husband does his stuffs in secret while she does hers in public making him a hypocrite.