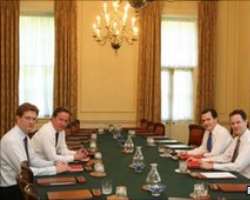 The toughest package of tax increases and spending cuts in a generation is expected to be unveiled by Chancellor George Osborne in his first Budget.

Middle-class benefits and public sector pay may be hit but 900,000 low earners will be taken out of the tax system.

Labour say the poorest will be hit and say the cuts are ideologically driven.

They say the economy is too weak to withstand such a spending squeeze and the move could push the UK back into recession.

Speaking ahead of his statement in the Commons at 1230 BST (1130 GMT), Mr Osborne said the coalition government would tackle the deficit “fairly” – the rich would pay the most while children and pensioners would be protected.

He added: “This is an unavoidable Budget because of the mess we have to clear up. So the coalition government will take responsibility for balancing Britain's books within five years.”

He also pledged to get “enterprise going” to help create jobs.

Mr Osborne is fulfilling the Conservatives' pre-election pledge to hold a Budget within 50 days of coming to office.

He has said the Budget will set out necessary plans to bring down borrowing over the next four years and how this will be divided up between spending cuts and tax rises.

The government says borrowing levels inherited from Labour – which are set to total £155bn this year – are unsustainable and delaying action will damage market confidence in the UK and store up worse financial problems for the future.

The chancellor is expected to announce a number of revenue-raising measures, including a levy on bank profits, an increase in capital gains tax and rises in cigarette and alcohol duties while a change in aviation tax is also expected.

But opposition, unions and employer groups have all expressed concerns about the steps being planned amid continuing speculation of a rise in VAT and a freeze on public sector pay beyond the one-year already planned in 2011-2012.

“People shouldn't be thrown out of work as a result of this Budget. Because if that happens it is not only very unfair on the individual… but it also costs the public purse more and in the end will lead to higher tax increases.”

She added: “We do need to get the deficit down, but it mustn't be brought down in a way that pushes the economy back into recession and which costs jobs, because if that happens that will make the deficit worse.”

The BBC's Political Editor Nick Robinson said the government's plans to raise personal tax allowances would take an estimated 880,000 people out of the tax system and also give millions of basic rate taxpayers a tax cut of £200 per year.

The plan is the first step towards a key Lib Dem coalition demand of taking all those earning less than £10,000 out of tax.

VAT rise?
The chancellor must find £3.5bn to pay for the giveaway – which will be clawed back from top rate taxpayers – and Labour are likely to argue it is irresponsible in the current climate.

Nick Robinson said it would be clear from the chancellor's statement that overall, people in all income groups would pay more as a result of other tax rises, spending and benefit cuts and limits to public sector pay and pensions.

He said it was “far from certain” VAT will rise from its current 17.5%.

In an e-mail to Lib Dem members on Monday evening, Deputy Prime Minister Nick Clegg said the budget deficit amounted to a “fiscal bombshell” that had to be dealt with.

'Difficult decisions'
He rejected claims that the Liberal Democrats had “sold out” after they campaigned during the election against early spending cuts due to the fragility of the economic recovery.

“We have always argued that cuts would be necessary, but the timing should be based on economic circumstances, not political dogma,” he said. “The economic situation today means that time has come.”

He added: “We have taken the difficult decisions with care, and with fairness at their heart. You will see the stamp of our Liberal Democrat values in [the] Budget. But nonetheless, it will be controversial.

“This is one of the hardest things we will ever have to do, but I assure you, the alternative is worse: rising debts, higher interest rates, less growth and fewer opportunities.”

Other measures widely forecast to be included in the Budget include a cut in the headline rate of corporation tax, a two-year freeze in council tax and the scrapping of Labour's planned 1% rise in National Insurance contributions paid by employers.

Unions have said any tax rises must fall predominately on the better-off, while business groups have called for radical reform of public services to avoid across-the-board tax increases.

“This needs to be a bold and ambitious Budget, with a credible pathway for restoring sound public finances and a convincing narrative for growth,” the CBI's deputy director general John Cridland said.