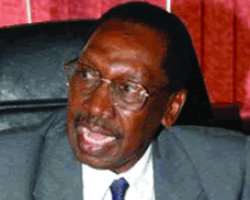 The appointment of Nigeria's electoral umpires has always elicited deep emotions and controversy. But the controversy trailing the latest effort to re-constitute the Independent National Electoral Commission (INEC) may dwarf all others in the past. The honeymoon between President Goodluck Jonathan and members of the opposition seems over.

The initial romance that greeted his emergence as successor to late President Umaru Yar'Adua has suddenly given way to suspicion over Jonathan's real intentions on the 2011 elections as revelation emerges that the President could have actually padded the list of the INEC members with members of his political parties, Peoples Democratic Party (PDP) ahead of the 2011 polls.

Former Deputy speaker of Oyo state House of Assembly, Niyi Akintola, SAN maintains that he was not surprised with the revelations alleging that the PDP government has always nominated their members into INEC, alleging that 'this was why he rejected the recommendation of the Uwais committee'.

Secretary of Yoruba socio-cultural organization, Afenifere, Senator Femi Okunrounmu, believes the expose on the nominated members of the new INEC is a bad omen for the 2011 poll. He said the revelation again calls attention to the need to take the power of who appoints the electoral umpires away from the President. 'What we are seeing is the reason why we in the opposition have been shouting ourselves hoarse that if we want to get our election right, we should not be allowing the President to be appointing INEC members.

You need to ask how he came about those he nominated. But for the revelation coming from the states, we won't know that the PDP has again carefully set in motion plans to rig the 2011 poll; they just put Jega there to give credibility to their rigging plan'.

Constitutional lawyer, Professor Itse Sagay (SAN) was unhappy that the PDP padded the list with its party members. ' If it is true that those that the President nominated are PDP members, I will say it is unfortunate but it is an indication that we are really not ready for democracy and we are just playing lip service to credible election in this country.'

Jonathan, after an initial prevarication, reeled out a list of fresh members for INEC with the Vice Chancellor of the Bayero University, Kano (BUK), Professor Attahiru Jega as the new chairman of INEC. Among those that made the list were right activists like Professor Lai Olurode, who was nominated as a national commissioner, and Mike Igini as Resident Electoral Commissioner (REC).

The list, expectedly, drew mixed reactions from Nigerians. Although several Nigerians applauded it saying Jega's appointment was a demonstration of Jonathan's commitment to ensure free and fair election, the chairman of the Electoral Reform Panel and former Chief Justice of the Federation, retired Chief Justice Mohammed Uwais, had a different opinion. He was quoted as criticizing the President for not adhering to the recommendation on how to appoint INEC members. He said, 'I am happy for Professor Jega, for being nominated to be the Chairman of INEC, I know him personally since we worked together on the electoral reform committee, but the method by which he is appointed is not in accordance with the recommendations of the electoral reform committee.

'The electoral reform committee recommended that the National Judicial Council will nominate three persons that it considered suitable for appointment as INEC chairman and those three names to be forwarded to the National Council of State, then the council of state will select one name and forward same to the senate for confirmation.' But hardly had the euphoria that greeted the nomination of Jega died that fresh revelation on how the President arrived at the list hit the airwaves.

It was the Conference of Nigerian Political Parties (CNPP) in Enugu state that first blew the whistle. It alleged that Edwin Nwatarali, who was pushed forward by the President as a resident electoral commissioner from the state, is a card-carrying member of the PDP. Nwatarali was said to have just recently resigned as the Chairman of Ezeagu West Development Centre in the State.

If the revelation from Enugu CNPP was not given much attention, it actually gored the opposition to dig more into the background of members of the new INEC. The Action Congress (AC) in Kaduna was next to blow the whistle informing the nation that the man picked from the state, Yakubu Shehu, was a senatorial aspirant of the PDP in the 2007 polls. He is also alleged to be the Chairman of PDP stakeholders' forum in Giwa local council of the state. The national publicity secretary of the AC, Lai Mohammed, also punched holes into the list already at the Senate awaiting screening when the upper chamber resumes plenary in June 22.

The AC identified Ambassador Mohammed Anka and Major General Bagudu Mamman as registered members of the PDP who were included in the new list of INEC. AC claimed Anka contested the governorship of Zamfara on the platform of the PDP in 1999 while Mamman, a member of the Board of Trustees of PDP contested Senatorial elections in 2003 and 2007 on the platform of the ruling party.

The AC who had always doubted Jonathan's sincerity over the electoral reform said that the President has not done enough to convince Nigerians that he is ready to bequeath a legacy of free and fair elections to the country.

Former governor of Ogun State, Olusegun Osoba, also warned against premature jubilation over the appointment of some right activists into the board of the INEC, 'Jega and Olurode are surrounded by wolves and they would be powerless in the midst of so many wolves.'

The chieftain of the Action Congress alleged that the list was compiled with serious inputs from governors and chieftains of the PDP, adding, 'what we will end up having in 2011 is trade by barter and a case of I scratch your back, you scratch my back' Osoba, who poured cold water on the jubilations that greeted the initial announcement of Jega as INEC chief stressed, 'I am not enthusiastic because Jega is going to be surrounded at the INEC by a lot of wolves. I don't know what one or two sheeps can do in the midst of so many wolves.

'The first shocking thing to me is that the appointments of the REC's were done through the governors of various states. If that is so, we are going to be having elections that will be based on trade by barter. There is a particular member that contested the 2007 guber primary in PDP but today he is nominated as a REC. Will that one do anything other than PDP job at INEC? And will he not lobby others to favour for his party?'

A member of the Justice Mohamed Uwais committee on electoral reform and the Executive Director of the Kaduna based Human Rights Monitor (HRM), Festus Okoye, urged President Goodluck Jonathan to drop all those identified as having links with the PDP. He specifically mentioned Ambassador Anka and Mr. Eddy Nwatarali.

Okoye, who buttressed the position of the AC, 'We view their nomination and the nomination of other card carrying members of political parties as a serious challenge to the building of a non partisan and credible electoral commission.'

The HRM boss appealed to the President and the security agencies to embark on a serious investigation of all the nominees concerning their affiliation with any political party, stressing that any candidate with link to any political party must be dropped from the list.

He appealed to the National Assembly to ask some probing questions from the nominees relating to their affiliation to political parties should Jonathan refuse to withdraw their nominations. But Osoba believes 2001 poll is already to the dogs unless Jega insists on credible election. He noted that the 2011 polls is doomed from the start maintaining that the election can only be rescued if Jega insists on transparent election. According to him, ' he should insist on implementing the Electoral Act to the letter in relation to the procedure of elections. The law says election will be by open-secret ballot system. The former INEC boss, Maurice Iwu, deliberately ignored the open part of the law and implemented the secret part of it.

'The secret part is to take voting paper and go to a secluded place and vote; but the open part is that you come and do accreditation in the open and the number of those that did the accreditation is recorded and issued ballot papers. So if it is just 200 that are accredited, you issue ballot papers to just 200. The secret part is for each voter to go to the cubicle and vote their choice and the result is then counted in the open and the results announced.

'The Press must be free too. Copies of the results at the polling booths must be given to the press and they should be free to publish, but not to collate and declare winner. Jega must insist on this procedure because if he does not, then we should forget 2011.

'I will advise Jega and Professor Lai Olurode that are on INEC that if they don't want to be rubbished, they must insist on implementing open secret ballot system between 8am and 1.00pm and by 1.00pm everything is concluded nationwide. There is no voting centre where you have more than 500 people at a polling booth and the attendance is always 30 to 60 percent and so Jega must insist on open secret ballot system'.

Akintola maintained, 'I lost hope on a credible election long ago when the PDP government refused to accept the recommendation of the Uwais committee. They always put their people on the election board and we are just lucky to hear of this, it is their stock in trade.'

Okunrounmu however believes Nigerians should demand that those people already identified be asked to quit the board. In some saner environment those people would have resigned by now but here they won't, it is for us to demand that they should resign because this senate would clear them'. Whether the indicted nominees resign or not, the about to be constituted INEC is surely born in controversy.