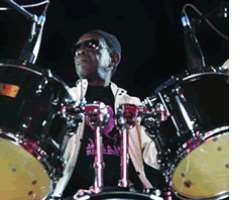 Thirteen years after his death, the superstar from the South-West Nigeria and his music are undergoing a revival, with a hit Broadway show, FELA!, album re-issues and even an upcoming film.

This makes it the perfect time to get close and personal with drummer Tony Allen, the man who fueled Fela's furious rhythmic fire and put the beat in Afrobeat.

Allen, who played with Fela for 15 years, was on a brief U.S. tour that stopped Tuesday at the Middle East. He led a band that covered material from his heated, new Secret Agent. Speaking on telephone from New York, the 69-year-old Allen, who has lived in Paris for more than two decades, wondered why it took so long for the mainstream to discover Fela.

'Why not before?,' Allen asked, adding that he's happy that the music and his longtime compadre are finally getting their due. 'Afrobeat is becoming more popular, but it's still not full yet. Musicians who are too young to know who Fela was have been exposed to the style and are just catching up with it. I'm hoping it will grow.'

Allen, with his trademark double beats on the bass drum, has long been doing his part to grow Afrobeat, starting with Fela's electrifying Afrika 70 band in the late '60s.

Fela charged much of his music with jagged political barbs, often aimed at the Nigerian government.

His lyrics landed him in jail on many occasions. Allen, too, was jailed, but he has focused more sharply on the music than on righting wrongs. That's one reason his hard-driving, horn-punctuated Afrobeat still sounds as James Brown-funky and urgent as ever. Allen also mixes in African highlife and American jazz – no surprise given that jazz drummers were an early influence.

'I did my homework with Art Blakey and Max Roach,' Allen said. 'And I tried to discover what I could do with a trap drum kit. When you're from Africa, people always think that you play the conga drums or whatever. From day one, I wanted to prove that I could play African music on trap drums. I took my time, but I was myself. And that's when Fela met me.'

It was a fateful meeting. 'Some people say I created Afrobeat,' Allen said. 'No, it was in conjunction with Fela. I had to find a way to play what Fela wanted. It was a challenge to myself. We were meant to meet each other.'

Inspired by his mother, Funmilayo Ransome-Kuti, a civil rights champion, Fela defied a corrupt and oppressive military government and devoted his life and music to the struggle for freedom and human dignity. FELA! is a triumphant tale of courage, passion and love, featuring Fela Kuti's captivating music and the visionary direction and choreography of Tony-Award winner Bill T. Jones.