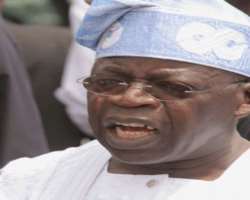 The two elder statesmen made this known in Lagos at the launching of a book: Contemporary Issues in Nigerian Constitutional Law comprising essays, written in honour of the former Attorney-General and Commissioner for Justice in Lagos State, Professor Yemi Osinbajo.

At the Thursday evening event at the Shell Hall of the MUSON Centre were eminent Nigerians such as Nigeria Bar Association (NBA) Chairman, Mr. Rotimi Akeredolu (SAN), State Attorney-General and Commissioner of Justice, Mr. Supo Sharore (SAN), Senator Olorunnibe Mamora, Special Advisers to Governor Raji Fashola, and several members of the Bar and the Bench.

Speaking on the electoral crisis, the former governor said the appointment of Professor Attahiru Jega as the next INEC helmsman (but still subject to the approval of the National Assembly) did not automatically translate to free and fair elections that Nigerians desire.

Tinubu explained that Jega alone "cannot guarantee more credible 2011 elections because INEC does not have a system that can perform effectively and perfectly to deliver what the people of Nigeria have been passionately craving for indeed both home and abroad.

"As it is now, INEC has no reliable system; neither does the commission have a viable voters’ register that can be used to conduct credible 2011 elections. The commission lacks a system, reliable and viable enough for free and fair polls.

"Professor Attahiru Jega is a man of integrity, but a tree can never make a forest. What is necessary is build a system that help in ensuring credible elections. As it is now, there is no such a system today in the commission," Tinubu explained.

Tinubu flawed the appointment of all the resident electoral commissioners appointed with Jega, saying they were unknown and not screened by the National Assembly, a situation he described as unwelcome and unfair.

He also explained that the country’s constitutional amendment being addressed was riddled with several anomalies and flaws, which would deepen the constitutional and political crisis plaguing Nigeria since 1960.

Tinubu said: "The way the National Assembly is going about constitutional amendment is not proper. The Assembly cannot pass the constitution as amended without making use of vital recommendations of the Justice Mohammed Uwais Electoral Reforms Committee Report.

"The Uwais report is sufficient enough to have generated three critical bills. But the National Assembly has not attended to the bills. It is a self-serving propaganda to cover all bad situations in the country. This is not accepted and fair enough.

He lamented how the administration of President Olusegun Obasanjo embarked on the constitutional review with some vital recommendations made and thrown out in the name of Obasanjo’s third term agenda. He said the current process must not be like that.