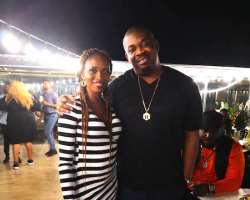 So I was invited to Latasha Ngwube's birthday gig lastnight. The event kicked off at 8:30pm yesterday. Some guests had arrived early and by 9:45 pm, we had more guests in the house. One of the guest who walked in at about that time was the King of the Mavin Dynasty Don Jazzy.. He walked in with DJ Big N.

I was in the midst of some guys i had met at the party and we were all chatting up when Don Jazzy walked in.. As soon as he grabbed a sit close to us.. these guys hailed the him, grabbed their phones and had a filled time taking pictures with him. I watched him and the guys with so much attention.

What struck me the most was Don Jazzy’s humbleness. I’ve met quite a number of celebrities at events who give an attitude but that wasn’t the case here. For everyone who walked up to him to say ‘hi’ , Don Jazzy bowed his head while stretching his hand for an handshake. He also got up a couple of times to greet . Like how? Don Jazzy of the whole universe? You will expect that he’ll either frown, refuse to strike a conversation or just outrightly snub you over pictures. On a scale of 1 to 10, i can say for a fact that Don Jazzy is one of the celebrity in my good book of the best Nigerian celebrities to meet. Just make sure you walk up to him at a perfect time, have something meaningful to say and make sure there’s no much pressure around him.

On a scale of 1 to 10, i’d give him a 10.
Whenever you spot him anywhere be rest assured that you don’t have to worry about him embarrassing or snubbing you. If you take a picture that doesn’t look nice, take it again. He won’t fuzz about it. That is just who he is. He’ll speaks to you with so much respect and regard. I’m sure you’re already looking forward to meeting him lol … Don’t dull when you see him oh.. seize the opportunity but don’t ask for money or favours. It cheapens your personality.