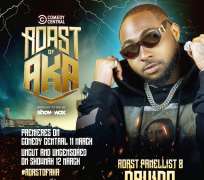 African humour is set to take over the world! This Comedy Central Roast of AKA is set to rally Africans from Lagos to Cape Town to join in the celebration of poking fun at the celebrities they love the most. Welcome three wise men to unite our continent’s socio-political differences in a spectacular show of love and laughter as part of the Comedy Central Roast of AKA in partnership with Showmax, coming to The Teatro at Montecasino, Johannesburg, South Africa on 21 February 2019.

Adding to his list of impressive achievements, Nigerian singer, Davido will become the first Nigerian to join the globally famousComedy Central Roast. Davido has racked up numerous nominations and awards including the BET Award and the MTV EMArecognition in the “Best International Act: Africa”. Just how much will his presence on the stage unsettle the SupaMega AKA?

Commenting on the Roast Davido said, “I’m such a big fan of Comedy Central, this is going to be a hilarious night. I’m ready, Africa are you ready? This is a Roast so nothing is off limits!”

Warm-hearted and gentle, Moshe Ndiki stands tall on stage and is a growing role model. As a performer he easily steps out of standard social lines and into the hungry minds of his audience. Free from inhibition, this comic genius has shown us that we can all laugh at ourselves, shatter taboos, and that we are all as strong as the walls we can break. Moshe is a media sensation and has enough fiery flamboyance to take on the Man – AKA.

Comments Moshe: “I love the Comedy Central Roast because this will be a platform for me to query aspects of how AKA believes he is the first guy who invented blonde hair in December, he might as well have pioneered the passion gap for coloured folk. I mean he is the first coloured guy on earth according to his tweets.”

Last but never least, Pierre Van Pletzen, also known as ‘Oubaas’ will fan the flames onto AKA when he hits the stage. Proud but tactile in his approach, and after many years on the circuit with his multi-faceted screen performance he has a certain knack which will light up AKA and burn the theatre.

Pierre Van Pletzen concluded, “It feels wonderful to be part of the Roast of AKA, whom I’d like to address as the non-humble infamously popular rapper, about a few things; his no-show at performances, his knowledge of Geography and since he says he loves soccer... I would like to ask if he’s practising his technique by kicking fans off the stage?”

So let’s get this Roast on: sit back and enjoy the fire as Comedy Central and Showmax bring you panelists Davido, Pierre and Moshe to join Francois Van Coke, Mark Fish, Nina Hastie, Moonchild Sanelly, Joey Rasdien, Papa Penny and Pearl Thusi as Roast Master. Get ready, because life just gets better when you laugh!